FARM profit has been positively influenced by higher gross farm income and lower costs compared with the previous year according to data collected and analysed in the 2019–20 Victorian Livestock Farm Monitor report. 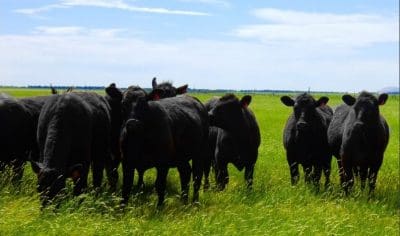 Part of the 2800 Angus cattle herd on Mt Fyans, in Victoria’s western districts

“Despite an average reduction in stock weight sold per hectare, strong lamb, mutton and beef prices coupled with an increased quantity and value of stock and feed on-hand resulted in increased gross farm income in 2019–20.”

The results of the annual survey provide a valuable sample of farm-level data for industry and Government.

Mr Henty said surveyed farmers in the South West recorded higher profits than those surveyed in Gippsland and Northern Victoria.

“Average variable costs decreased for surveyed farmers in Gippsland and South West Victoria, as most were able to reduce their reliance on purchased supplementary feed, coupled with decreased market price of hay and grain.

Data collected from farm businesses includes farm income and costs for the financial year, trading and breeding details, feed input and production, fertiliser and labour inputs and a complete stock, feed, land and farm machinery inventory, including all farm assets and liabilities.

Mr Henty said once the data has been collated and analysed, participants are provided with detailed information on their financial and production performance.

“They can use this information to understand the cash, profit and wealth position of their business to inform on-farm decision making and help to build business resilience.

Limited places are available for the 2020–21 Livestock Farm Monitor project. Individual farms and farm discussion groups who are interested in participating should email Agriculture Victoria at fmp.victoria@agriculture.vic.gov.au for more information.

Source: Agriculture Victoria. A copy of the Livestock Farm Monitor report can be downloaded at https://agriculture.vic.gov.au/livestockfarmmonitor