EVERY two years, a Landcare stakeholder with a passion for improving the health of soils, vegetation and biodiversity through sustainable agricultural and land management practices is awarded the Bob Hawke Landcare Award, and up to $50,000 to develop their knowledge and skills. 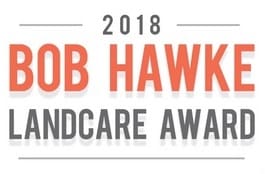 Nominations for the 2018 Bob Hawke Landcare Award are now open. Nominees should be dedicated to caring for the land, a champion of better environmental practices, and passionate about sharing their knowledge and time with others.

In 2016, the award was presented to Queensland farmer and conservationist Stephen Burgess. Mr Burgess has run Wurraglen Nature Refuge in Dagun for almost 20 years, combining sustainable farming and light grazing.

A strong believer in promoting the Landcare ethic as an integral part of society and culture, Mr Burgess was delighted to be honoured with the award.

“This award has given me opportunities to further my research in soil health and experiment with techniques that were previously unavailable due to the lack of resources,” he said.

“My hope is that I can share my findings – the good and the bad – with other farmers, so as an industry we can grow and develop sustainably, and be better stewards of our land.”

According to Mr Burgess, what sets the Award apart is its recognition of a person’s achievements, regardless of the size of their projects.

“What matters to this award is an individual’s passion and the opportunities their projects create to bring people together to work, share knowledge, and promote the Landcare approach to natural resource management and sustainable agriculture,” Mr Burgess said.

Nominations are judged by the Bob Hawke Landcare Award Advisory Panel, and a winner announced at the 2018 National Landcare Awards in Brisbane on Thursday 11 October.

The Bob Hawke Landcare Award is administered by Landcare Australia through support from the Australian Government’s National Landcare Program.