IT’S been a long time since the subject of rainfall has warranted discussion on Beef Central’s weekly kill reports, but the past week’s precipitation earns some rare attention.

As can be seen in this BOM map showing rainfall for the week ended yesterday (Monday), large parts of the eastern third of Queensland, NSW and Victoria have received worthwhile rain above 25mm, and considerably higher in places. 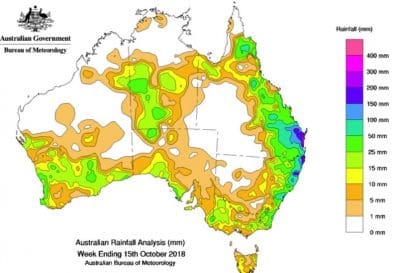 A large triangle of Queensland country bordered by Roma, Clermont and Brisbane has now received generally good grass-growing rain, with patches of the Wide-Bay/Burnett receiving the best of the falls around 150-200mm, and 125mm around Kilcoy.

While the general trend is hardly drought-breaking, it’s provided much-needed psychological encouragement that it hasn’t forgotten how to rain, and with the arrival of some follow-up in coming weeks, would set some fortunate producers up nicely heading into summer.

For producers further west in interior heartland cattle areas of Queensland and NSW, rain has again failed to materialise, or has been so light that it’s had no real impact. And across the border, apart from the coastal strip, falls were generally lighter, with teasing falls of an inch or less across the Northern Rivers, while the New England received little moisture. Areas like the Hunter Valley, which now has a green tinge after earlier falls of an inch or so, will need follow-up quickly to achieve any real benefit.

This week’s falls have seen some Queensland processing plants plan to drop kill shifts on Friday as a result of supply shortage, and several processors could not rule-out dropping time in plants in southern Queensland sheds next week. That’s due initially to logistical problems in getting cattle out of paddocks and onto trucks this week, but also to a reduced appetite among producers to sell stock. Slaughter cow numbers, particularly, now look like coming under pressure.

“I don’t think this is any easy fix – all processors in Queensland will struggle for supply for a few weeks, at least,” one trusted contact said this morning.

“Anybody with feed, or good soil moisture after rain will now be driven to get cattle heavier. Soil temperatures are already high, so grass response should be fairly rapid,” he said.

Another factor in shortage of slaughter supply in coming weeks could be cattle producers in NSW/Qld with farming country who have received rain, who will be intent on getting a sorghum crop in the ground, to try to make the most of record-high grain prices. That could ‘rob’ manpower resources who might otherwise have been occupied with cattle work for a few weeks, Beef Central was told.

Store cattle offerings have predictably retracted in size this week, with around 4000 head on offer at Roma today. Cow numbers within the Roma yarding retracted dramatically to around 400 this morning, less than half of what earlier yardings were seeing. Monday’s Toowoomba sale was seriously compromised, numbers-wise, while Warwick, Gunnadah and Naracoorte sale numbers fell by more than half.

Young cattle prices have already shown a firming pattern early this week, following a trend first seen in a spike on AuctionsPlus on Friday, when weaner and backgrounder-types took-off after early rain.

It’s widely anticipated that grass finishers will re-enter the store market in a substantial way on the back of rainfall over the past ten days, especially if there is some follow-up about.

“While it will take some time for country to react, the rain has restored some confidence, more than anything else,” one agency contact said.

After a 10-15c rise the week before, Southern Queensland grids this week are unchanged at 510-520c/kg for four-tooth grassfed steer and 440-450c for heavy cows. Central Queensland grids are 5-10c behind those rates, and North Queensland 15c behind that. There’s no sign of ‘wet-weather’ money in the market up to this point.

South Australian grids this morning were offering 480c for grassfed heavy steer and 400c on cows – up 10c/kg on last week on the back of some local rain – with southern NSW steady at 525c on heavy steer and 430c on cows. A northern NSW export processor had offers this week for four-tooth steer at 480c and a best of 440c on cows.

For those producers who have unfortunately missed out on recent rain, the fact that others have received it might in fact represent a market window opportunity, to move some surplus cattle into a strengthening slaughter cattle market, or young cattle or cows as stores.

The 14pc rise in kills reported last week is somewhat distorted, however, because the previous week was impacted by public holiday breaks celebrated in Queensland and NSW, the two largest processing states.

Queensland accounted for 73,589 head last week, up 20pc on the week prior due to the holiday effect, while NSW was +18pc at 32,672 head. Year-on-year comparisons for Queensland are not possible for the timebeing, because this time last year reporting was discontinued for a period over processor concerns about reliability of the NLRS statistics. The NSW year-on-year figure was +18pc.

Processing numbers in Victoria and South Australia continue to be distorted by the closure of the TFI Murray Bridge plant in SA in January, due to extensive damage caused by fire. A volume of cattle previously killed at Murray Bridge are currently being processed across the border in Victoria, pushing last week’s state kill at 25,678 head 17pc higher than this time last year, while in contrast SA’s kill is back 43pc year-on-year to 4351 head last week.

Tasmania’s kill last week reached 4348 head, down 12pc on the week before, but 9pc higher than a year ago.

Expect to see some drops in throughput in next week’s state kill reports due to the rain effect.