THE long-anticipated change in the cattle supply/demand cycle has officially occurred, with slaughter volumes across Eastern Australia now displaying clear signs of decline, and grid and saleyard prices responding accordingly. 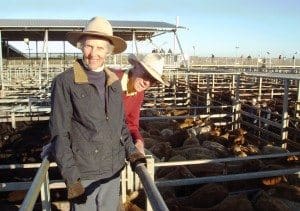 Last week’s Eastern States weekly kill tally of 169,564 head was the lowest full-week (not impacted by public holidays) since February, and the trend over the past 12 weeks (see kill graph on Beef Central’s home-page) now displays tangible signs of softening, after an 18-month period of near record slaughter.

Last week’s kill reported by the National Livestock Reporting Service was close to 2pc below the week before, and almost 7pc lower than its recent high point back in April.

While Queensland’s kill last week was more or less unchanged on the week before at 87,960 head, all other states further south displayed clear evidence of struggling to maintain numbers.

Victoria was the worst affected, declining 11pc on the week before to process 23,989 head for the week. Reports are circulating about some big Victorian hot boning sheds now back to three and four-day weeks, due to restricted cattle supply.

The NSW kill was less affected, dropping 1pc on the week before at 40,511 head; while South Australia was back another 1pc at 8868 head. Tasmania also declined 1pc to 4876 head last week.

Click on image for a larger view. Source: ABS

The two graphs published here, produced monthly by the Australian Bureau of Statistics, also support the view that the national (not just Eastern states) cattle slaughter/beef production cycle trend has in fact already turned the corner.

The graphs for monthly adult cattle slaughter and beef production are both what’s called ‘time series analyses’ using rolling averages, meaning they are seasonally adjusted, and taking trading day effects into account. Both clearly show that the peak in the cycle has now passed, and the trend line is again down.

Some Queensland processors are now holding bookings out only for two weeks – a sharp contrast with heavily congested space bookings seen earlier this year, in places six weeks or more in front.

There’s no immediate threat evident to five-day kill rosters in Queensland, but already the overtime and extra weekend shifts that were widespread earlier are now disappearing, or at very least in decline.

As stated above, some southern processors are already dropping week-day shifts, and the numbers are simply not going to be there to maintain full kills for the foreseeable future in some areas.

Simple math says that if the industry kills 120 percent of available slaughter cattle for two years, as it has, sooner or later it has to be followed by a lengthy period where the industry kills only 80pc of that capacity – and circumstances appear to be trending that way now.

The trends evident in supply, outlined above, have produced another sharp response in grid pricing this week in Queensland, with many grid segments rising another 10c/kg this week, on top of some 5c/kg rises a week earlier. That adjustment trend appears fairly consistent across southern, central and northern parts of the state.

Sit back and enjoy some of this week’s record direct consignment quotes for SEQ kill this week:

Readers can add at least another 30c/kg on top of that for competitive southern Australian grids, and there is still absolutely no evidence of the recent price disparity (north vs south) starting to break down.

We’ve heard of MSA grids for southern Victorian kill this week as high as 570c/kg. That sort of pricing is making life very difficult for processors involved, and it’s now clearly being reflected in retail pricing on the domestic market.

What’s been clearly evident in recent weeks is southern processors pressing north to buy slaughter cattle, for obvious reasons. They’ve been setting weekly sales like Dubbo on fire, but for whatever reason, have not yet displayed a mood to head further north than that for procurement.

But with the vast gulf of price differential still evident between southern Queensland slaughter cattle and those in southern NSW and Victoria, it can only be a matter of time. Big volumes on offer in centres like Dubbo is obviously part of the explanation for not travelling further.

The ‘head north’ buying trend has tended to ‘cascade’ up Eastern Australia over the past month or so, with at least one prominent northern NSW processor pushing as far north as Mareeba and Charters Towers in Queensland chasing killable stock in recent weeks, and lifting markets along the way.

“Everybody is still working hard to secure supply, heading to where they see a few numbers,” the contact said. “But it’s getting harder for southern processors to gather any numbers around them, and some are skipping shifts.”

A Unique set of circumstances

Up to this week, at least, there’s been an unprecedented set of circumstances in play in the Eastern Australian slaughter market, with rates of kill continuing at near-record levels, at the same time as cattle prices have soared to record-setting levels. That alignment absolutely defies traditional supply/demand logic, but these are indeed extraordinary times, and are only likely to get more-so.

After breaking through the historic 500c/kg barrier two weeks ago, the Eastern Young Cattle Indicator continues to trend higher, reaching a new record of 534.25c/kg on Thursday. That’s up close to 190c/kg on this same period last year.

Some analysts are suggesting that the sustained high slaughter levels recorded over the past six months throw into question the original herd numbers used by ABARES and Meat and Livestock Australia to calculate their 2015 industry forecasts. The belief is that the enormous kills are an indicator that MLA/ABARE seriously underestimated the number of cattle actually in the Australian herd, after the two exceptional years in 2012-13.