It was only a matter of time before such moves were made, as foreshadowed in last Tuesday’s weekly kill report. 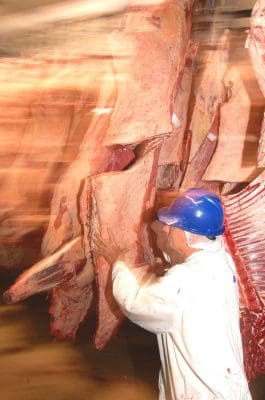 Confirmed shut this week is the Australian Meat Group’s Dandenong plant in Victoria. The facility has a capacity to kill 750 beef a day, but has been operating recently at only 400-450 a day.

AMG management told Beef Central that the current closure was for this week only, but decisions on future kills would be made on a week-to-week basis. Extreme high cattle prices and its impact on profitability was offered as the reason for the decision, but management noted that saleyards prices in Victoria this week had in fact eased a little.

Other Victorian plants exhibiting extreme stress this year include Chinese-owned Tabro Meats at Lance Creek, which only started its 2016 kill a month or so ago, but currently processes just 140 head per week, using a single one-day shift. Tabro’s second plant at Moe is yet to run its chain in 2016.

Beef Central was earlier told that the Gippsland Beef Packers Poowong plant in Victoria’s East Gippsland would shut for an extended period due to supply/cost issues,  however management has pointed to mechanical issues as the specific reason behind a three-day closure, not cost-to-process. “Cattle prices are not helping, but we were in the market buying stock today,” a spokesman said. Poowong has operated on a tally of about 400-a-day until recent supply difficulties set in.

What’s now clearly evident across eastern Australia is that the processing industry is retracting its processing capacity very, very quickly. The question now being pondered by processors everywhere is the cost of shutting down for a period, versus the cost of continuing to kill expensive cattle at very substantial losses.

That decision may be easier for ‘commodity’ style hot boning plants, but much harder for plants with brands and program business servicing regular international customers, where continuity is critically important.

One Victoria processor contact told Beef Central this morning that large beef plants in his state could easily be losing $300,000 a week at present, killing cattle under current conditions. He said losses could easily range from $50-$100 a head on trade cattle, to ‘beyond $200’ on some lines.

“We are seeing losses that are just frightening, given current cattle prices,” he said.

“It is completely unsustainable. That makes the decision to close much more tempting,” he said.

“But even if the numbers go to the point where a few southern plants fall over, there still won’t be enough cattle this year to properly sustain the others. Just getting back to breakeven looks attractive at present.”

Further widespread rain across the Maranoa and Darling Downs in the past 24 hours has further disrupted cattle supply to southern Queensland processors this week. Falls of 25-35mm were reasonably common from Roma and Taroom east, causing some cancellations of bookings for kills in coming days.

JBS Dinmore last week completed six of nine kill shifts, for example, and many other northern NSW and southern Qld plants are in a similar boat. Some were aiming for a full shift roster this week, but rain may now reduce that prospect.

Talk of mass retrenchments at JBS Dinmore in the local Ipswich newspaper last week appear unfounded, and may have been election-related.

The Queensland Times suggested as many as 500 staff had been put off, which appears well-wide of the mark. Beef Central understands about 120 casual staff were put off when weekly shifts went from ten to nine late last year as the herd reduction set-in, but with the plant killing only three days a week for the past three weeks, some staff have in fact been ‘stood down’ to align with the greatly reduced kills. There’s a big difference between temporary stand-downs and retrenchment.

There has been no substantive change in southern Queensland grid prices this week, with last week’s record-setting rates around 570c/kg for the four-tooth heavy steer and 525c on heavy cows remaining in place. Despite the money on offer though, processors continue to struggle to raise a kill, of any sort.

What’s happened, though, is that the big premiums being seen a week earlier for saleyards cattle over grid prices has now started to dissolve.

Yards prices across Victoria and NSW and southern Qld have trended downwards over the past week, meaning where there were price disparities of 30-40c/kg with direct consignment a week earlier, that is now much narrower – perhaps back to 10-15c in places, based on this week’s completed sales.

Big selling centres like Dubbo have also seen numbers greatly reduced, shifting from 8000 a couple of months ago to only 1000 or so this week, with reports of another 20-30mm of rain all through that country again this morning. That suggests local saleyards numbers may dry up badly during winter.

And cattle producers are reluctant to sell bullocks too soon, knowing the horrific replacement costs they face for young cattle in the current red-hot market.

There is not a lot of contrast in grid pricing between southern states and Queensland at present – 10c/kg at best – highly unusual at this time of year, when there is often a 20c/kg gap, and often as much as 30c. That reflects the extent of tight supply right across the country, with a big line of 750 high quality Angus feeders and backgrounders selling at Roma store sale this morning to a high of 410c/kg. In earlier times, southern buyers would have come north and bought those steers, landing them home for the same price as local southern cattle.

“It’s pretty much the same cattle price from Mareeba to Naracoorte at the moment,” one contact said.

Veteran Queensland processors say they have never seen a July when they did not have all their kill requirements already covered for the month.

“July always used to take care of itself after the end of the tax year, while August would at times be a tighter period. This year that will be only worse – it may cause more closures for a period,” one processor contact said.

“It’s reached that tipping point again. It’s going to be hand-to-mouth for the next couple of months, at least.”

Some stakeholders are now speculating that one strategy that might come into calculations during the August tight-spot might be to bring forward normal Christmas plant closures by a few months, and have a few weeks off to perform annual maintenance and upgrades, in the hope that cattle supply picks up again closer to Christmas. In turn, that would mean a shortened Christmas/New year break, getting back to work earlier in the New Year, if the cattle are there.