After some southern Queensland operators added another 10c to already record-high numbers last week, offers seen this morning have on four-tooth HGP-treated heavy steers at 680-705c/kg, and good heavy cows at 640-655c/kg. Central Queensland rates are 10c/kg behind those figures, as is normally the case.

Southern NSW and South Australian grids remain at record highs again this week, with heavy steers hitting 810c/kg in some grids on four-tooth grass HGP-free steer, and cows at 680c/kg.

It’s worth pausing for a moment to compare current grid rates with the same period last year.

In our report of 17 August last year, we quoted southern Queensland four-tooth grass ox priced at 625-640c/kg, with some of those higher offers for HGP-free only. Reports at the time were already rejoicing at the prices being paid by export processors, but pale into insignificance compared with today.

Rates have improved 160-170c/kg over the past 12 month cycle on heavy grass steers, adding an additional $595 to a typical four-tooth grass bullock.

In its mid-year Industry Projections released last week, Meat & Livestock Australia revised its 2021 national slaughter estimate slightly lower to 6.3 million head – the lowest level in 35 years – on the back of supply shortages that show no signs of easing.

Estimates indicate that close to three million head have been killed in the first six months of 2021, with slaughter in the second half of the year expected to pick up slightly, as more cattle come off feed. Typically, slaughter rises in the later stages of the year. Click here to view earlier mid-year Projections Update. 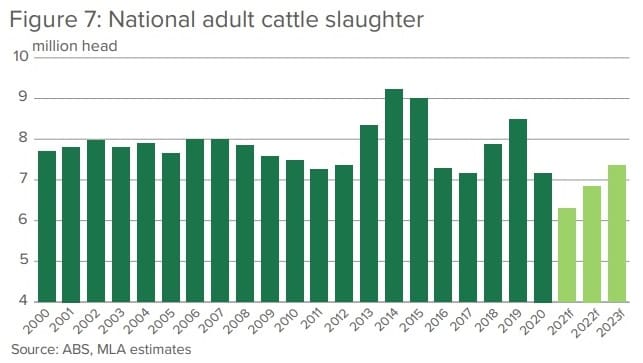 The national seven-day slaughter to Friday shows another significant decline, with the adult kill ay 95,320 head, down another 3.3pc on the previous week, as supply across eastern Australia remains particularly tight.

Last week’s kill was the lowest in nine weeks since early June, when JBS was hit by the cyber-attack which closed its Australian plants for a week.

Female slaughter continues to hover in the 42-43pc range, well below the 47pc figure which marks the trigger-point between herd rebuilding and herd decline.

Most states were impacted by the decline, with Queensland’s kill falling another 3pc to 48,633, it’s lowest level in nine weeks; and NSW down 4pc to 25,851 head. In Victoria, slaughter numbers fell 4pc to 11,790, continuing a winter decline that started to gather pace since mid-May, and South Australia dropped 4.5pc to 2491 head.