AREAS of heavy unseasonal winter rain across parts of Central and eastern Queensland, plus NSW and Victoria have disrupted processing operations over the past week.

Several large export operators have reported lost days at some sheds as a result of the rain – in parts of Central Queensland up to 150mm or more over the past seven days – causing bookings to be cancelled or postponed.

The rain has also impacted saleyards offerings in some areas, with only about 3300 head on offer this morning at Roma store sale. 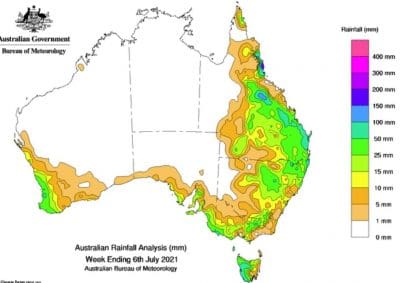 Some slaughter cattle consignments might be delayed for up to a week, Beef Central was told, until paddocks and access roads dry-out enough to allow uploads to occur.

While some sites have missed a day’s kill, others have adjusted, moving cattle from other areas or feedlots with good weather access to keep rosters topped up.

Queensland direct consignment slaughter grids remain largely unchanged this week, with best offers for grassfed heavy ox in southern parts of the state this morning between 665-685c/kg for four-tooth cattle (some sites offering 690c/kg for HGP-free), and ranging from 610-625c for heavy cows. Offers from Central Queensland plants were 10c/kg below those rates.

In northern NSW, an export processor has re-activated its cow grid this week, offering 600c/kg for 6-8 tooth cows 275-350kg, with reasonable cover, with a 30c/kg premium for Angus.

In Victoria, good quality heavy cows last week were averaging 660c/kg, while heavy grown steers were at 725c/kg – both up a few cents on the week before.

The young cattle market has also been impacted by eastern states rain over the past week, on top of continued demand outstripping supply, pushing the Eastern Young Cattle Indicator to new records again in recent days.

The EYCI reached yet another record high of 944.4c/kg (carcase weight equivalent) on Monday, on the back of more impressive results from saleyards in southern Queensland and northern NSW late last week.

Yesterday’s EYCI is up an extraordinary 181c/kg on this time last year, which was already at record highs.

MLA’s feeder steer indictor has also leapt higher, closing yesterday at 462.58c/kg liveweight, rising 33c/kg since mid-June. The feeder indicator, made up of yearling and grown steer categories 220-500kg liveweight, hit an all-time record of 465c a week ago.

National Livestock Reporting Service reported a national seven-day kill for the week ending Friday of 97,818 head, a fall of close to 11,000 head or 10pc from the 2021 season’s highest kill of 108,600 the week before. Weather played a considerable part in the sharp reduction.

Last week’s kill was down 23pc on the same week last year, and almost 50,000 head or 33pc lower than the same week in 2019, when drought-driven herd liquidation was in full swing.

The female proportion of slaughter continued at very low levels last week, representing just 41.4pc of the total, following a succession of weeks below 44pc. As mentioned last week, this suggests herd rebuilding is going on, in earnest.