AFTER five or six months resorting to a ‘just in time’ approach to slaughter cattle supply, the recent uplift in numbers is seeing some processor livestock buyers filling their booking schedules for the next couple of weeks.

Recent hot, dry days have probably hastened a few more sale decisions among suppliers, but that process had already started before the recent hot spell.

It’s been a long time since eastern states processors have had placements covered that far forward, and reflects the current encouraging lift in cattle supply. That’s not likely to see a full restoration of operating shifts, however, with most plants maintaining reduced output to year’s end, in the knowledge that 2017 is not looking any better, supply-wise.

The recent lift in cattle flow also explains a further 5c/kg dressed weight grid price decline evident on some Queensland direct consignment grid offers this week, on top of earlier falls of 25-35c/kg since the bell was rung at the top of the market in mid-October.

The larger in-flow of cattle which started three or four weeks ago has had a clear impact on grid pricing. Certainly some vendors have seen this movement as the shift in the cycle, and elected to consign cattle before further price deterioration occurs.

Depending on location, SEQ processor grids currently are offering 535-545c/kg the four-tooth ox, and 485-490c/kg for heavy cows. Across the border, a northern export plant has offers for kills week commencing 21 November of 540c for no-HGP four-tooth steer and 470c for heavy cow.

While that’s about 3pc behind the week before, it still represents a dramatic rise on the previous two months, where kills struggled to exceed 115-120,000 head. Contributing to the slight decline last week was Butcher’s Picnic holidays observed at a number of Queensland and NSW plants, with a few more scheduled for this week. 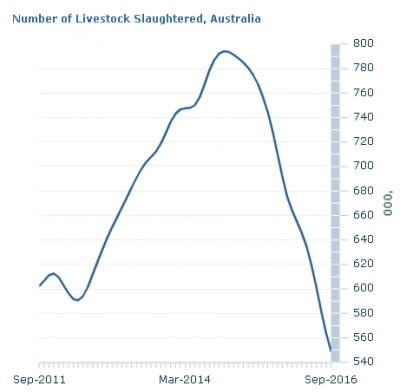 The Australian Bureau of Statistics yesterday issued this graph, which presents the 2016 slaughter cattle supply predicament in a somewhat different, but equally dramatic fashion.

The results are seasonally-adjusted, removing the estimated effects of normal seasonal variation (i.e. Christmas plant closures) from the series, so that the effects of other influences can be more clearly recognised.

What it shows is:

Cattle slaughter decreased by 3pc in September 2016 compared with August 2016, the ABS statistics suggested, down by 179,558 head or 25pc year-on-year.