SLAUGHTER cattle supply continues to confound earlier popular predictions that processors would struggle for supply during the third quarter this year.

This week’s eastern states kill for the week ended Friday of about 129,600 head is still only 5pc less than the largest kill seen this year. 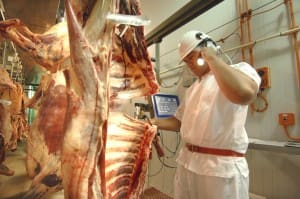 Roll back the tape three or four months, and the popular view was that slaughter cattle this year would be very hard to find during the third quarter, ending September. Predictions of short-term processing plant closures due to a cattle vacuum were common.

But weather, as it often does, has had the final say, and July-September quarter beef production is now looking a lot higher than many had anticipated.

Very dry to drought conditions across large parts of the largest beef producing states of Queensland, NSW and western Victoria continues to push cattle to market in numbers much greater than expected. Traditionally, processors complain that Brisbane Ekka week is a hard week to source stock as producers take a few days off, but this year there’s evidently been little problem filling rosters.

A number of large processors spoken to for today’s weekly kill report say they are well-covered for bookings for the remainder of August, with one large Queensland plant talking week commencing September 11 as the first real window for larger consignments.

It’s made something of a mockery of earlier cautions issued by meat sales desks to overseas customers, suggesting that meat would be in very short supply in 3Q.

At the start of the year, MLA was forecasting a 3pc drop in cattle slaughter for 2017, with the third quarter most heavily affected. That was based on ‘normal’ seasonal conditions however, and by July, MLA’s mid-year projections update suggested total 2017 beef kill would be ‘about level’ with 2016, at 7.25 million head – up about 150,000 from predictions just three months earlier.

The heavy impact of dry conditions – and in a defacto sense, through rising feedgrain prices – is also evident in the Eastern Young Cattle Indicator, which yesterday reached a 16-month low of 550.25c/kg.

That’s down a breathtaking 175c/kg on this time last year – possibly the largest-ever year-on-year change seen in the indicator since it was launched in 1997. As recently as early June, the EYCI still sat above 655c, more than a dollar higher than today’s rate (see home page ‘industry dashboard’ graphs).

The depth of the impact that the dry is having is clearly evident in the numbers that continue to be put before processors – despite the substantial declines that have occurred in grid and saleyards prices over the past six weeks.

Many Queensland and northern NSW processor grids have now fallen 50-60c/kg since late June, yet there is no real sign of ‘push-back’ from producers yet over price.

Grid offers available in southern Queensland this morning were in a wide range, from 460-490c/kg on the benchmark four-tooth heavy grassfed ox, and heavy cows from 405-430c. The wide disparity in those offers perhaps best indicates that some processors are still bringing their offers into alignment with competitors, as prices move south.

Contrast these offers with our report of 13 June, when best southern Queensland direct consignment rates were 540c/kg on four-tooth steer and 480c/kg on cows.  Despite the recent large price adjustments, processors are still logging losses on grassfed bullocks – some in the order of $50/head for grassfed steer, perhaps less severe on cows, feedback suggests.

Continuation of current very dry weather into September will only put further pressure on the current cattle market, but at some point, numbers must run out of steam. That’s pointing to a fourth quarter eastern states kill now somewhat lower than what was expected earlier.

As the popular old processor saying goes, “You can only kill them once.”

US export market continues to pull back

While currency is playing a big factor in current difficult meat trading conditions, the overall lack of demand out of key, premium-paying markets like the US is making the sell-side very difficult for export processors.

US imported beef prices moved lower for the fifth consecutive week last week, with Steiner’s imported 90CL beef indicator down another A11¢ to A567¢/kg CIF. Five weeks ago, that figure sat at 656c – close to a 90c/kg decline since then.

Overlay that with the A$ trend, which four weeks ago was still worth US76.5c, and it’s evident what one of the major contributing causes is.

The US fed cattle futures price moved lower last week, Steiner reported, as buyer concerns of falling prices continuing into the northern hemisphere spring were reflected in the market. However, the prospect of strong demand after the US’s 4 September Labor Day holiday may help reduce the downward pressure being applied to imported beef prices, Steiner said.