Weekly kill: forecast rain could have big bearing on supply

IT STILL has to deliver, but BOM’s highly-promising eight-day forecast for rainfall across eastern Australia could have a major bearing on slaughter cattle supply, and potentially price, in coming weeks.

The BOM eight-day image pictured here (click on image to enlarge) shows a sea of green across southern and central parts arts of Queensland and NSW between now and March 23. Much of the impact could occur in areas of Queensland that are desperate for a late break to the summer wet season. 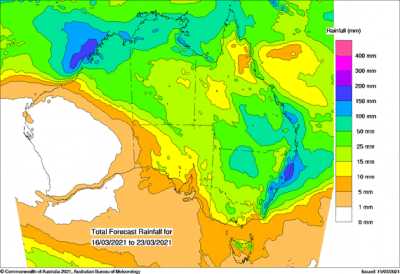 Some areas of NSW and coastal are forecast to receive 75-150mm or more. Dry areas of Central Queensland around Alpha had already received 70mm this morning, with the low pressure system yet to really exert its influence.

If it delivers as anticipated, the weather event could put another serious handbrake on slaughter cattle supply over the next two months – just at the time when some processors were starting to get a little ahead for requirements in forward bookings.

One processor told Beef Central that he was somewhat perversely hoping that the cattle pipeline did slow for a period, because of the buildup of meat stock in the system due to the flatness of international demand for Australian beef at present.

“It would be a good thing, to just let that backlog of beef in storage clear a little, if there are rain disruptions,” he said. “The long-term benefit would offset any short term benefit in maintaining access to cattle.”

Another large southern Queensland processor said his business had already been forced to postpone some kill bookings pencilled in for this week’s rosters, due to rain-forced loading difficulties. Those cattle would not be lost to the system, but would go back a few days or a week or so, he said.

Current bookings, in some cases two weeks forward, would continue, but widespread wet weather would likely slow vendor interest in selling-down in the run in to cooler weather, the contact said.

“Mid-March rain means the grass growing season has shorted right up, but any feed growth at all will be seen as a bonus in those areas of Queensland that have missed out so far,” one processor said.

The rain that’s already fallen, with prospect for more to come, is opening up the prospect for a very large oats planting across areas of NSW and Queensland this year. Large areas around Gunnedah, Tamworth and elsewhere have already been sown, and this follow-up rain will be an excellent boost to fodder crop prospects, Beef Central was told.

Some Queensland processor slaughter grids retracted further over the past seven days, but this appears to be more about aligning with competitors’ offers in a falling market, rather than finding new ground.

Best offers from competitive Queensland processors this week were 650-660c/kg for grassfed heavy steers four teeth (some of those offers for HGP-free only), and best heavy cows 580c/kg.

Some NSW grids have also fallen this week, back 10c/kg, as more cattle start to move. Wagga is this week offering 665c/kg for four-tooth heavy steer and 600c/kg for heavy cows. Naracoorte remains at 675c/kg for steer and 610c/kg for cows.

The adjustments in grid pricing in early March mean cows in Queensland have now retracted 40c/kg in a series of corrections since early February, and steers are back by 40c/kg from their earlier high-point at 690c.

The NLRS weekly kill report for the week ended Friday shows a four percent drop in rate of slaughter last week, declining to 97,301 head for the five eastern states.