This would have been a record, except for an adjustment in January figures, TEM pointed out. Some of the data inputs to TEM beef processor model can be delayed in reporting, so there are sometimes revisions made* to previous margin updates. This has been the case for January, with softer North Asian beef export prices pushing the processor margin further into negative territory, to an adjusted $340/head.

The original update suggested a $310/head loss on January slaughter cattle, but this has now been pushed even further into the red, on the back of export price updates coming in 4pc softer than previously reported. 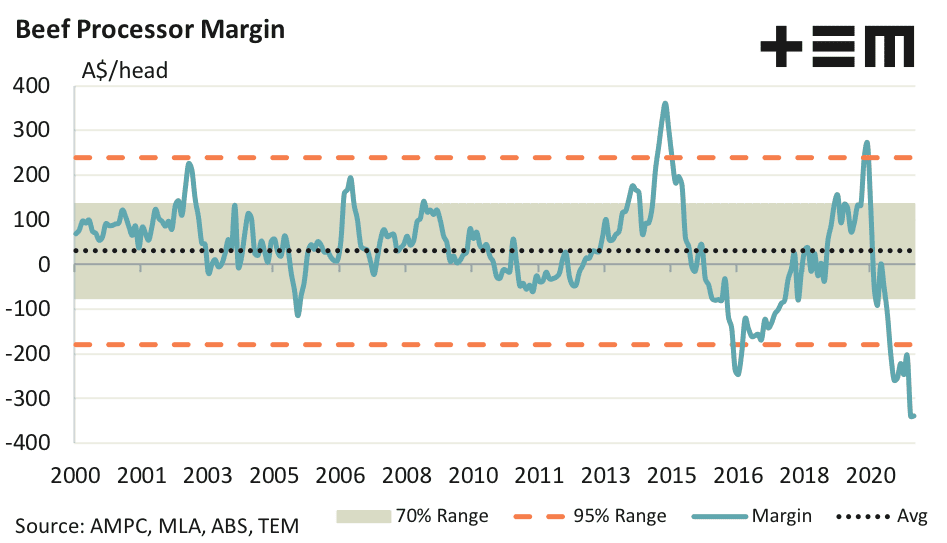 After the previous couple of weeks where Queensland processors lowered their offers on slaughter cattle, grids have remained steady north of the NSW border this past week.

Dry weather across substantial parts of Queensland, together with signs that cattle are starting to ‘move’ in more extensive cattle areas as first-round musters get underway, are pushing a few more cattle towards processors in Queensland, easing the slaughter supply challenge a little heading into mid-March.

One large processor said his company was probably in its best supply position in around 12 months, having around two weeks’ worth of forward bookings at some company sites.

Easter is often a decision-making point for Queensland producers facing a limited body of feed heading into winter, and one company said its plant was already reasonably well booked through to early April.

“It’s unusual, we haven’t seen it this way (in terms of advance bookings) since before the rain arrived this time last year,” he said.

Some producers may also have concluded that the best of the prices in the current cycle may now be behind us, and have now decided its best to move now, before markets deteriorate further.

As of last week, all of Queensland’s significant processing sites were back at work, with JBS Townsville starting its chain for 2021 on Monday 1 March. Teys Lakes Creek at Rockhampton started operations the week prior, while NH Foods Borthwicks at Mackay recommenced operations a fortnight ago, after a two-week maintenance break.

The adjustments in grid pricing in early March mean cows in Queensland have now retracted 40c/kg in a series of corrections since early February, and steers are back by 40c/kg from their earlier high-point at 690c.

The north/south transition happened about three weeks ago.

Supply chain sources suggested three factors were in play in the fact that southern states grids are now ahead of Queensland, typically by 5-20c/kg:

The NLRS eastern states weekly slaughter report was not issued by the time this item was posted. Results will be added to this item when they arrive.

* The Thomas Elder Markets processor margin model can be adjusted retrospectively as new input data comes to light. The February 2021 figure includes co-product pricing and some export pricing that is yet to be updated fully for the month, so this figure is likely to be adjusted slightly in subsequent releases.