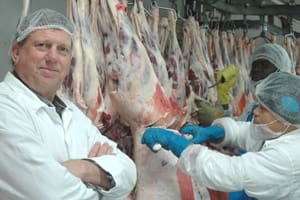 The agreement marks a significant step forward in developing a red meat alliance to establish a consistent and long-term supply chain for sheep meat and beef into China from WA.

In June this year, Bunbury-based V&V Walsh announced it had struck a deal with China’s Grand Farm and the Inner Mongolian government to supply it with sheepmeat and beef, leading to yesterday’s official agreement signing.

“This joint venture is an exciting development which now presents an opportunity for the significant transformation of both the WA and Inner Mongolian cattle and sheep meat industries,” Mr Baston said in a statement.

The Minister said the venture was testament to the vision and leadership provided by Chen Xibin, president of Grand Farm, and Peter and Greg Walsh, owners of V&V Walsh. China has a massive and growing consumer market for lamb and beef, which is increasingly demanding innovative, safe and quality red meat products.

“We are continually looking for ways to strengthen our existing supply chains and develop new ones to better meet growing consumer demands.”

Company principal, Peter Walsh said the potential of the deal would not necessarily be limited to those numbers.

V&V Walsh has made substantial investments to increase the capacity of its abattoir in Bunbury and says it is ‘in the final stages’ of gaining approval to export to China.

The project will include cross investment from the private sector in both countries over a five-year period, including private Chinese investment into WA to increase lamb and beef production; and into Inner Mongolia, where work is currently underway to develop new processing facilities, an expansive network of feedlot systems, as well as state-of-the-art research and development to support the meat and livestock industry.

Grand Farm is said to be China’s largest red meat importer, but still only supplies one percent of the Chinese market. It aims to increase that level to 3pc.

Chinese consul-general in Perth Dr Huang Qinquo, who was at the signing of the deal, described it as a good starting point.

“With improvement in the living standards in China, the structure of consumption of food in China is experiencing changes,” he said.

Mr Baston admitted WA needed to boost its productivity to keep up with overseas meat demand.

“The total cattle herd in Western Australia is 1.9 million head, and our sheep numbers are down to about 15.5 million, so we have to increase productivity,” he said.

“As the Department of Agriculture and Food we can help by making sure productivity does increase. Finding markets, of course, increasing demand and productivity is the next thing we need to match.”

“We used to have a sheep industry here of some 38 million sheep. We’re now down to 15 million, so we’ve got a long way to go.”