IN further evidence of the extreme operating challenges across red meat processing at present, Singleton, NSW based export beef processor EC Throsby has bought the Hilltop Meats beef abattoir operated by BE Campbell Group at Young, in the state’s southwestern slopes region.

Both plants, being hot-boning style operations reliant mostly on dairy cows, cull beef cows and bulls, produce manufacturing-style frozen beef, and are direct competitors in the saleyards markets across NSW and Victoria. The two plants are about four hours’ drive apart. 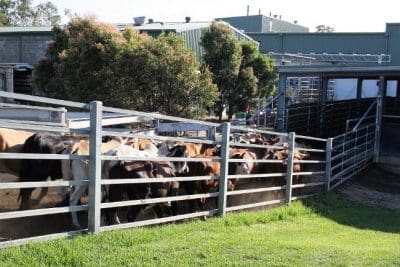 The move appears to be about consolidation, but both plants are expected to continue to operate along current lines.

The Campbell family bought the Hilltop Meats business, previously owned by Grant Edmonds, from receivers in 2010.

Managing director Ted Campbell said the BE Campbell Group had invested heavily in revamping and retooling the facility to enable it to recommence production and achieve export accreditation.

Two significant droughts had occurred since then, however, and challenges had arisen with access to export markets that had made it ‘tough going.’

“The business was not formally on the market, but during discussions with Edward Throsby, we floated the idea of a sale. There are complementarities between the two businesses – both are hot-boning, and Throsby is a specialist in that area. We are happy that Hilltop has gone to an Australian family-owned company,” he said.

Funds from the sale of Hilltop Meats would be invested in the company’s much larger pork processing business in Sydney, one of the largest in Australia.

“Slaughter rates have continued to decline after significant periods of drought, sending cattle prices to historical highs as processors across the country scramble to secure kill numbers. Our plant has not been immune to these challenges,” he said.

“For some time now we have continued into the headwinds, investigating and attempting every possible option available to us to improve financial performance and ensure the plant remains operational.”

The sale to Throsby’s represented a strategic bid for the plants’ long-term survival and a logical changeover to one of the country’s leading hot boned beef processors, Mr Campbell said.

“Like our business, Throsby’s is Australian family-owned – which was important to us. We know it is very successfully run and Throsby’s has deep industry experience and international networks to enable growth at the site.”

The ownership transition will take place immediately, with little to no disruption to the daily operations of the Hilltop plant, and with full utilisation of the existing workforce planned.

“We’re acutely aware of the importance of the site as an employer in the region and from the beginning it has been our mission to re-establish the site as a viable operation,” Mr Campbell said.

“This decision, whilst difficult, is in the best interests of the site’s longevity and the ongoing employment of the wonderful team here. We want to leave the site in a better position than when we found it, so the last thing we wanted to do was close the doors and let it gather dust again.”

The Hilltop site currently employs around 110 staff. At its peak, the facility was processing around 1500 beef each week, but had recently cut back to four days’ operations each week.

“We reduced numbers because we found the more we killed, the more money we lost,” Mr Campbell said.

“Hilltop Meats has been a significant employer in the local region of Young and we look forward to continuing to provide a growing opportunity for permanent employment in the region,” he said in a statement.

“The current processing environment is challenging; however, we plan to be here for the long haul,” he said.

The Throsby family has been in the meat processing business for 70 years, starting with David and Joe Throsby in 1951. The business employs more than 300 staff in its current operations in Whittingham. The current processing facility started operations in 2000, and is regarded as one of the most modern and efficient hot boning facilities in Australia.

About 95pc of Throsby’s production is exported to countries including the US, Canada, Mexico, Indonesia, Japan, Korea, Singapore, Taiwan and the Middle East. Significantly, unlike Hilltop Meats, Throsby also holds a China frozen export license, and China has been a growing market for the company in the past three years

“We would like to thank the Campbell family for the very professional way they have handled the transaction,” Mr Throsby said.