THOMAS Foods International unveiled its brand new $30 million boning room at its Murray Bridge plant this week, with the first shift in the new facility taking place on Monday.

The state-of-the-art fabrication room is a clear demonstration of the sort of enormous financial commitment necessary by export processors across the continent in keeping Australian beef and sheepmeat at the forefront of world standards for product and fabrication quality, hygiene and efficiency.

TFI’s new boning room is part of a much more extensive upgrade process at the company’s flagship Murray Bridge plant in South Australia. It will not only substantially lift the facility’s beef throughput, but will deliver greater efficiencies and enhance workplace conditions for staff.

The South Australian State Government provided funding support for the project, committing $2.5 million through its regional development fund. Murray Bridge is one of the largest employers in the southeastern corner of South Australia, with about 1550 staff likely by the time final stages are completed. TFI is the state’s single largest private employer in regional areas.

Murray Bridge has been the focus of considerable investment by TFI over the past five or six years. The first stage of the upgrade was the new beef killfloor completed in 2013, followed by chiller upgrades, rendering and other infrastructure to keep pace.

Going forward, the new boning room will pave the way to new value-adding opportunities at the plant, which will expand the labour requirement further.

Mr McKay said there was a natural tendency across the TFI business to move to a greater proportion of chilled over frozen product, for quality reasons, and the new Murray Bridge boning room would contribute substantially to that. “But having said that, we’ve had a strong chilled business for some considerable time,” he said. One of its unique features is an industry-first trim sortation system used to analyse, mix and batch trimmings into specific lean meat grades, allowing further value-adding along the chain.

“We’ve been able to adapt the X-ray technology to grade our boneless trimmings as part of the sorting process, as opposed to doing it visually,” Mr McKay told Beef Central.

While there are different hybrid versions of this process already in existence in processing, this is believed to be the first time the full process has been seen in an Australian red meat plant. 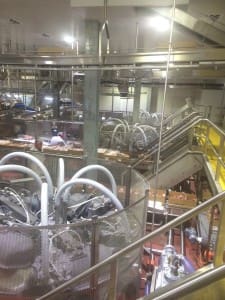 Three new high-volume rotary cyyovac machines have been installed. Click on images for a larger view.

The $30 million spent on the project includes the new boning floor itself, plus additional expenditure on value-adding and plate freezing upgrades, in order to keep pace with future greater throughput. Two new large plate freezers will be installed by year’s end.

Before the beef line increases to its full intended 1200/day throughput, the old original boning room will be re-purposed – half to be used for additional chiller capacity, and the remainder  as an expanded and improved value-adding facility.

Planning and construction has been a two-year project, with a unique challenge being that the new beef facility is built directly beneath the plant’s existing lamb boning room, built in 2010.

The new floor has seen the move from a two-shift daily boning routine on the old boning room, capable of throughout of around 850 head per day, to a single shift in the new facility with a capacity of 1200 head per day across a six-day week.

The expansion in Murray Bridge’s beef capacity will not compromise the plant’s lamb kill in any way, remaining at the current level of 11,000 a day.

“Within our own group, we have significant experience and capability which saw a team put together to work with Proali and the other suppliers to deliver what we needed in terms of efficiency and performance,” Mr McKay said.

TFI project managed the development itself, working with key suppliers to deliver the realisation of the design that was required.

“The transition has gone very smoothly, missing only a week between the last bone in the old facility and the first, on Monday, in the new one. We’re very proud of our project team and all who worked with them,” he said.

“The successful completion of this project is going to further underpin TFI’s expansion of beef and lamb brands in both domestic and international markets.”