Teys aims for energy self-sufficiency with $42m project at Wagga

ONE of the nation’s largest beef processors, Teys Australia, has taken a big step in reducing its carbon footprint and energy reliance by launching plans to develop a $42 million Low Emissions Energy Hub (LEEH) at the company’s Wagga facility in NSW. 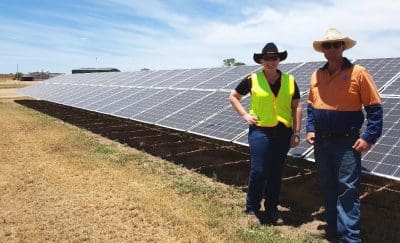 Teys Condamine feedlot manager Phillip Lambert and a straffmember in front of a small port of the yard’s new 1034 panel solar array. Solar panels will also be a part of a multi-pronged Low Emissions Energy Hub project at the company’s Wagga processing facility

The Australian-first project will include a combination of bio-generation of methane, solid waste digestion, solar panel arrays, energy storage and biomass-driven boilers to produce steam.

Teys will fund half the project’s overall cost, and will apply to government for the remainder.

Teys chief supply chain officer Tom Maguire said energy and water costs at the company’s Wagga facility had skyrocketed $2 million in the last financial year, and that Australia’s beef processing costs were up to three times higher than international competitors.

In a move designed to bring sustainability and long-term security to the Wagga plant, the Low Emissions Energy Hub will result in the facility becoming independent with all electrical and thermal energy needs to be met by the hub. This will free-up the available power in the grid, particularly during peak periods.

Mr Maguire said the new LEEH hub would have significant returns for the facility, Wagga and the environment.

The region’s farmers would also benefit, with local farms standing to increase their income by supplying farming waste to the site to be used for energy generation.

“The LEEH will give us a competitive edge for a business that contributes $512 million to the regional economy and supports 4000 direct and indirect jobs,” he said.

Teys Australia has won numerous awards for its eco-efficiency, environmental and sustainability practices. In the last two years, the company has invested in a number of energy and water efficiency projects including the installation of a 300kW solar farm and a biogas powered cogeneration facility at its Condamine feedlot on Queensland’s Darling Downs (see earlier story).

“Teys will continue to invest in sustainability measures, not just because it’s great for the environment but also a perfect fit for our business,” Mr Maguire said.