TRIAL work analysing the performance of DEXA yield assessment technology for beef carcases is taking much longer than originally anticipated, and is unlikely to be completed for at least another 12 months.

However industry rumours circulating this week that meat processor Teys Australia was considering cancelling DEXA trials in beef carcases at its Lakes Creek plant in Central Queensland are inaccurate, Beef Central was told this morning.

In the absence of more rapid progress being made in analysing DEXA yield assessment performance in beef, Meat & Livestock Australia and its research collaborators have focused attention on the lamb version of the technology, which is now making considerable progress (see today’s separate story).

However one processing contact said DEXA was much easier to adopt for lamb carcase yield assessment than beef, because the physical mass of a typical beef carcase made it much more difficult to analyse, requiring greater x-ray penetration power and protective shielding to operate.

Teys Australia said it ‘remained keen’ to validate the DEXA technology’s yield predictive ability as part of the Lakes Creek beef trial. At the same time, however, the company also continues to examine other alternatives for lean meat yield assessment including the European-made E+V cameras (discussed below), which are already in wide use in European beef processing operations.

“Analysis and implementation of DEXA has gone a lot slower than what we would have liked,” a Teys contact told Beef Central.

MLA’s original vision for DEXA, when it was launched in 2016, was that it could start to appear in beef plants some time the following year.

One of the current hold-ups to faster progress is understood to be access to suitable CT-scanning equipment, necessary to provide a ‘gold standard’ against which DEXA and other yield assessment technologies like E+V can be measured and validated. 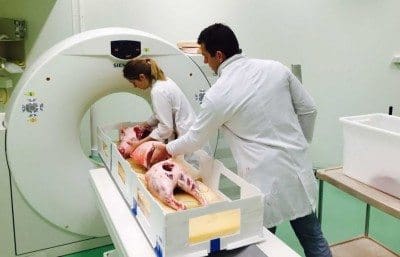 Discussions on that, involving Teys, AMPC, Murdoch University, MLA and others, are progressing.

Should DEXA be eventually rolled-out for beef carcase yield assessment in abattoirs as planned, convenient access to a CT scanner will be essential to allow each unit to be calibrated and checked for accuracy, Beef Central was told.

A portable version of a CT scanner that can be taken from site to site for DEXA calibration is one option being considered, but that would require specialised licensing for equipment emitting X-rays. As can be seen in thos photograph, one of the challenges is that CT units are capable of handling smaller lamb carcases, but are currently incapable of scanning an entire beef carcase, meaning the body must be broken-up into portions first.

Another possible option during the validation trial work in Central Queensland is using a local CT scanner located at the nearby Rockhampton Base Hospital.

Currently, the DEXA unit at Teys’ Lakes Creek plant is fully installed and operating, with ‘basic’ comparisons already being made against physically boned-out carcases.

Other technologies under examination

In the meantime, other technologies continue to surface that have potential to measure yield in beef carcases. Many offer attractive advantages over DEXA, being far cheaper to install, requiring little or no additional space on the production line, and emitting none of the harmful radiation that means DEXA must be operated in large, lead-lined rooms to avoid exposure.

One such DEXA installation in Victoria is said to have required 30 tonnes of lead sheeting, which caused subsidence in the plant’s cement floor due to its sheer weight.

The ALMTech consortium and Teys are both exploring cheaper and less intrusive technologies including a new 3D-imaging process for yield assessment.

In parallel with its DEXA carcase analysis at Lakes Creek, Teys has installed a European E+V whole carcase yield camera, for yield comparison trials. The E+V camera, described as similar to the industry’s original VIAScan technology from the 1990s, is relatively cheap, and does not present the same challenges to install as DEXA.

The technology is already well-proven in European beef processing operations, but the view is that Australian cattle phenotypes vary more widely than those in Europe, and the system would need to be re-calibrated for local use.

Once the Lakes Creek project has access to CT scanning technology, both DEXA and E+V yield assessment systems will be compared against the CT’s ‘gold standard’ for yield accuracy.

Other DEXA units are already installed in beef applications, but they are substantially different from the whole-carcase unit installed at Teys Lakes Creek. A smaller unit has been used in a robotics trial at JBS Dinmore near Brisbane, but this equipment only scans a small area of the carcase near the brisket to determine the robot’s best scribing lines, and is not compatible with whole carcase yield assessment.

Similarly, DEXA was originally installed in a number of southern sheep plants not to analyse carcase yield, but to define cutting lines for the plants’ automated robots.

As described in a separate MLA Press release item today, MLA’s attention is now focusing on developing the lean meat yield analysis potential in sheep carcases, made easier because their smaller size makes them much easier to penetrate using DEXA scanning.