COMPETITION for livestock, especially lambs and sheep, is expected to increase at eastern states saleyards with the easing of workforce capacity restrictions on Victorian red meat processors. 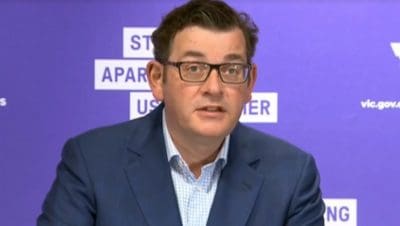 Victorian Premier Daniel Andrews yesterday announced an easing of the 67 percent peak workforce limit on red meat processing businesses to 90pc in regional areas and to 80pc in metropolitan Melbourne from today.

Mr Andrew yesterday said metropolitan poultry processors would go from 80pc to 90pc workforce capacity “because there are some significant animal welfare issues there.”

“So with spring lamb, calving and other seasonal factors, not to mention the fact that Christmas is coming, the busiest time of the year for all of our supermarkets, we are pleased to have been able to lift those percentages of workers.

“As well as supermarkets more broadly, they go pretty much to full-tilt, that’s been a long discussion, a very very long discussion and I’m grateful to all those industries for the way they’ve worked with us.”

However, Mr Andrew today refused to give a timeframe on when the meat processing sector could return to 100pc workforce levels as Christmas approached.

“We’ve gone as far as we can at this point.

“I don’t rule out us going further and I know there are some challenges with Christmas being the biggest, the busiest time of the year, together with other matters that we’ve talked about probably in more fulsome terms than any Premier has ever talked about this industry,” he said.

The changes have been welcomed by the Australian Meat Industry Council, the Victorian Farmers Federation and stock agents in New South Wales and Victoria.

Dubbo stock agent Peter Milling said the easing of the restrictions would be welcome throughout the industry and he had no doubt it would boost competition for stock in saleyards.

“I think everybody in the industry would be pleased about it, because once the Victorian abattoirs close up or slow down it has an effect on the markets in New South Wales and that makes a difference.”

He has not noticed any impact of the restrictions on competition to date, but expected they would if producers could not get their stock killed or processors chose not to go to some markets for stock.

Elders western region livestock manager at Ballarat Graeme Nicholson also welcomed the changes, but said the industry’s processors needed to be at 100pc capacity to handle the expected Spring lamb flush leading up to Christmas.

“It will certainly make a difference (to competition)….but we still need to be 100pc not 90pc.

“It’s better than nothing.”

AMIC chief executive officer Patrick Hutchinson said AMIC has been at the forefront advocating for the easing of the 33pc reduction in peak onsite workforce for its Victorian meat manufacturing members.

“There has been lengthy consultation, provision of data, following all DHHS advice and implementing strict COVID Safe plans, resulting in zero reported cases by DHHS for the meat manufacturing sector for over three weeks.

“We are still working on the functional details under the Victorian Premier’s roadmap system on restricted workforce, including testing and on-site COVID safe plan management,” he said.

“We had continually growing concerns around livestock supply blockages, and workers being in limbo for an extended length of time should the 33 percent reduction continue.”

“But we are not at 100 percent yet, so there will remain impacts on the supply chain from processors, wholesalers, cold stores, independent local butchers and even supermarkets,” he said.

AMIC said a recent survey of its Victorian members showed that the 67pc workforce restrictions have delivered, in some cases, up to a 40pc reduction in meat supply to certain businesses. There has also been an initial impact on the peak spring lamb season, due to constrained ability to buy lambs under normal conditions and there have been some pork supply issues, the council said.

“Due to these results, AMIC will continue to work closely with the Victorian Government towards pre-COVID normal meat and smallgoods supply, and hopefully soon be able to send the message to domestic and export customers that the Australian meat supply chain is fully open for business,” Mr Hutchinson said.

VFF Livestock Group president Leonard Vallance said the easing of the restrictions provided much needed respite for farmers after weeks of consultation between key farm industry groups and the State Government.

“(Sunday’s) decision to boost workforce capacity at Victoria’s meat processing facilities I’m sure comes as a relief for many anxious farmers.

“Victoria is in the middle of the peak spring meat processing season,” he said.

“As an industry, we process more than half of Australia’s sheep and lamb meat.”

“We’ve been calling for the restrictions imposed on meat processing facilities to reflect the number of COVID-19 cases present, especially in regional Victoria,” Mr Vallance said.

“While it’s pleasing to see regional workforce capacity boosted to 90 percent for meat, we expect once metropolitan cases fall to a comparable level to those in the regions we’ll see capacity increased for processors in Melbourne.

“Farmers just want to continue farming at the end of the day and we’re confident ourselves and the industry can continue to do so in a COVID safe way.”