HARNESSING shockwaves to tenderise meat and reduce its ageing time was one of a range of novel technologies on show during the International Congress of Meat Science and Technology held in Melbourne earlier this month.

Several presentations provided a glimpse into the future, at emerging processing technologies which show promise for both tenderising lower-value tougher cuts of meat, and improving the consistency in better quality product.

Shockwave technology, or hydrodynamic pressure processing, is the application of mechanical pressure pulses in a large water bath that disrupt the muscle structure, resulting in an instant tenderisation effect and accelerated ageing of the meat.

The basic principle behind shockwave processing can be seen in this short video released by Japanese food company, Kagame, using tomatoes to illustrate the effects. The tomato retained its external shape after exposure, but an operator can insert a straw and suck out the liquid, which has been fully integrated internally.

Dr Buckow is a research group leader for food transformation at CSIRO in Melbourne. His group focuses on the development of sustainable processing platform technologies and services that deliver gains in productivity and efficiency across the food value-chain. 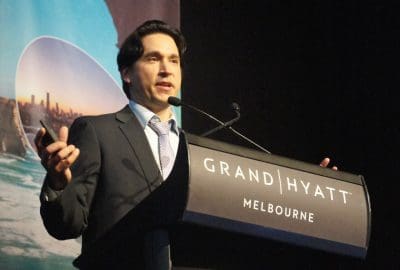 The world’s second shockwave unit for meat processing applications, and the first for Australia, was installed at CSIRO’s Brisbane laboratory. It uses electrical discharges to generate the massive shockwave, replacing the earlier use of explosives for the same purpose.

Since beef is composed of 75pc water, as the pressure wave goes through the product, some of the energy is transferred to it, which in turn creates a mechanical stress that tears the muscle structures.

Under the trials whole muscle primals and portioned steak-sized pieces of meat from the eye round and striploin were vacuum-packed and placed in the water treatment chamber, and exposed to anywhere from one and ten ‘shots’ or discharges.

The result was a clear improvement in tenderness, as measured in Warner Bratzler shear/force tests.

In one test, shear force in beef samples was reduced by 50pc, and the improvement remained consistent throughout the ageing process. Potentially, the technology could also be used to shorten ageing time by 5-6 days on some cuts. 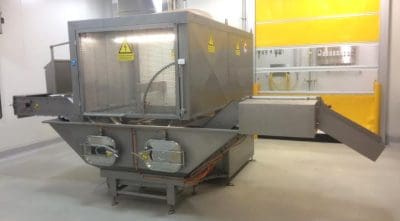 Importantly, the shockwave process had no impact on the product’s meat colour, rate of purge (the unappealing moisture loss sometimes seen in the retail tray), cook-loss or pH.

“We hope shockwave treatment can become a cost-effective alternative to other invasive tenderisation technologies already in use, such as mechanical blade penetration of muscle,” Dr Buckow said.

“It is low energy consumption, but the current main challenge is in trying to identify formats and packaging materials that survive the shockwave treatment,” he said.

During questiontime, Dr Buckow was asked whether meat treated with the shockwave technology had yet gone before sensory taste test panels.

He said it had not, but pointed out that trials so far had found the only differences were in the disruption to muscle fibre structure, and not to other traits.

Another question asked whether there were plans in place for commercialisation.

Unlike a similar technology called pulsed electric field, the beauty with the hydrodynamic pressure processing technology was that there was already a continuous pilot-scale machine in place, with the ability to handle up to 100kg of product per hour.

“We can potentially demonstrate this technology on a continuous basis now, producing larger quantities for an interested supplier for market testing and consumer studies,” he said.

“We’re looking for interested parties to join a consortium to move this technology into commercial applications.”

Because of the physical principle behind the shockwave effects and non-invasive nature of the technology, shockwave provided a unique opportunity to tenderise meat in a mechanical manner, he said.

Shockwave has the potential to improve meat quality and increase the safe storage time of meat intended for export markets.