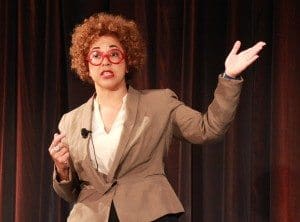 Kate Mills addresses the AMIC 2015 conference at the Gold Coast this morning.

However industry employers say this trend is already well underway, with the percentage of female workers in red meat processing increasingly dramatically in recent years.

Workforce consultant and Business Mills CEO Kate Mills told the AMIC conference on the Gold Coast this morning that digital and robotic technology is bringing major changes to every industry, and will cause around 40pc of existing jobs to disappear – mainly in more repetitive, lesser skilled roles.

At the same time Australia’s ageing population is causing a “demographic bulge” in the labour force. By 2020 in Australia there will be the same number of one year olds as there will be 65 years olds.

Ms Mills believes the digital revolution will, as past technological revolutions have done, create more new jobs than it will erase.

As a result Australia will need more reskilled workers to take on these new roles (and also to pay taxes to help to pay for an ageing population).

Employers will therefore have to become more “female friendly” if they are to attract the skills base they will need, she said.

What processors can learn from train drivers

While this was not necessarily easy for industries that were not traditionally seen as female friendly industries, she said freight and logistics provider Aurizon’s recent efforts to employ more female train drivers demonstrated how that could successfully be done.

She said the company focused on removing “conscious blocks” to more female employment, which were the things businesses knew that blocked women from working in their organisations, such as a lack of pay equity between male and female workers.

They also removed “sub conscious” blocks, or ‘inherent, unconscious biases’, which were much harder to identify but equally problematic.

She explained that when Aurizon wanted to increase its number of female train drivers, it went out to the employment market by offering very attractive packages for female drivers. However, it still found that this was not leading to an increase in the percentage of female drivers being employed.

When the company then delved down to a management level it found that male hiring managers of train drivers did not think, at a subconscious level, that females could drive trains.

“So they had to do a lot of work with them around unconscious bias and now they have a lot more female train drivers,” she said.

Introducing unorthodox employment arrangements such as roles that allow working mothers to work more hours each week so they could have more school holiday time off in return to look after their children was another strategy that had helped employers to successfully attract a female skills base.

During question time, Super Butcher managing director Susan McDonald told the audience that butchers were at the creative end of the meat industry, but there were not a lot of female butchers currently working in the industry.

“I approached my managers this week and told them that I would like to introduce a quota (of female butchers) and the silence was deafening,” she said.

Ms Mills said quotas could be difficult to implement and perhaps should be used as a last resort, but agreed that “if you really want to move, there is no doubt that quotas do that”.

It is already happening: Roger Fletcher

“We are already doing it, it is physically happening,” he said.

“In our business (female employment) has grown dramatically in the past 10 years, it could be up to 25-30pc now.

“We are doing more further packaging, in a lot of places the women are better.”

Mr Fletcher said changes to working visa rules for backpackers, which he helped to lobby former Howard Government immigration Minister Amanda Vanstone to introduce, and which grant visa extensions to backpackers in exchange for working in regional areas, had been a major breakthrough in shoring up better labour supply for regional processors.

He said female backpackers in particular were valued workers.

“In this room here if we said to all the processors tomorrow we have just lost all of the back packers, see what would happen. That was the biggest change, we used to all complain that we couldn’t get labour, now they come out you see.

“We find that the Asian girls are brilliant, but unfortunately you only have them for a few months.”

The award was introduced in recognition of the fact that he meat processing and export sector has traditionally been a male dominated business.

“With a growing female talent pool coming out of schools and universities and with more consumer power in the hands of women, meat processing and export companies who fail to recruit and retain women and ensure that they have a pathway to leadership positions potentially undermine their own long term competitiveness,” the award documentation states.

“For those that do, the benefits of gender diversity are readily evident. This award seeks to identify the depth of female talent that already exists within the Australian meat processing and export sector and use them as a role model to encourage the next generation. AMIC believes it is critically important that we celebrate these women and the important contribution that they make to the industry’s overall success.”

Nine finalists from across Australia will be recognised at tonight’s AMIC conference dinner at the Gold Coast.