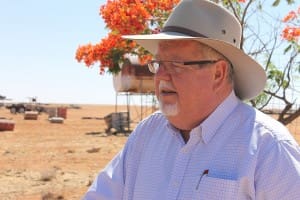 Senator Barry O’Sullivan pictured recently during a visit to Goodwood Station near Boulia in western Queensland.

There’s a dusty book with a lot of dog-eared pages that sits on my office shelf.

It was written about two decades ago by a Harvard Business School Professor named Michael Porter.

It is called “The Competitive Advantage of Nations.”

There are a few theories inside its pages that are past their used by date and a number of examples that are a bit outdated now, but the core concepts within the book are still very, very relevant.

The book argues that governments already understand that in order to maintain the living standards of their people, they must be able to assist the business community to compete in an increasingly tough world marketplace.

But to achieve this, the book argues, trustworthiness is an absolute necessity across the business supply chain.

And as the word itself implies, an exchange partner is trustworthy when it is worthy of the trust of others.

A fortnight ago, myself, alongside Senators Williams, Canavan and Mackenzie sponsored the establishment of a Senate Inquiry into the red meat processing industry.

While many of us believe this review is long overdue, it was announced in-part because, as the most recent example at the Barnawartha saleyards demonstrated, the trust between processors and producers is seemingly in dire straits.

When widespread mistrust reigns across a $12 billion industry, where more than 60 per cent of that product is exported, government has a responsibility to review the disputes to ensure the long term viability of the sector.

There is little doubt our beef sector is currently facing a tougher marketplace with overseas competitors challenging Australia’s export markets by offering an ever improving product, and alternative suppliers of protein, such as chicken and pork, increasing their grip of market share domestically.

International economic drivers of farm gate profitability, such as world prices, subsidisation and protectionism, are outside Australia’s control.

But as one of the world’s largest exporters of beef, Australia must never shy away from making home grown, strategic improvements to its competitiveness.

We must work to change the perception that our product is competing in a commodity marketplace, because when viewed as a commodity, the prospective customer will almost always choose based on price.

Simply put, by creating value and using it as a selling point, we are able to change the perception of our commodity.

Whether through better genetics, improved pastures or new technologies, Australia’s beef producers have a range of ever increasing options at their disposal that provide opportunities to evolve our beef industry from a mere commodity to a premium product.

Even though the traditional comparative export advantage of Australia’s red meat producers has been in producing lower-priced manufacturing beef, there should be potential for the red meat industry to increase profits by striving to increase the amounts of higher-value product we export, in addition to sales into the existing, mainstream markets.

One of the most obvious steps to increase higher value trade in the future is by improving the strategic alliances between producer and processor.

But we can only achieve this if there is trust along the supply chain.

That is why it is among the most fundamental ambitions of this Senate Inquiry.

As the terms of reference reflect, a giant spotlight is about to be shined on supply chain transparency.

In order to measure supply chain performance and to identify areas for potential improvements in the beef industry there is a need for transparency.

It is important because it enables producers to understand why their product has received a specific grading and a specific price.

It enables producers to be able to adjust their operation, if needed, to improve the quality of their final product.

When producers can better meet processor requirements, it enables processors to better market its premium product to the marketplace.

When producers and meatworks are able to jointly supply a consistent, high quality product to the marketplace, especially overseas markets, it increases the likelihood of providing better returns for all segments of the supply chain.

The increased attention being given to agriculture in the Canberra hallways as the sector reaffirms its place as a major driver of exports is reflected in the sheer volume of reviews underway.

Consider the near ‘perfect storm’ of reviews in which our red meat industry is currently engaged:

We can now add the Senate inquiry into the processing sector.

I share the same worldview as my colleague Barnaby Joyce that achieving a better return at the farm gate must be the bedrock of all agricultural public policy.

The family farm is the best business model for our rural communities and we must do our utmost to defend it.

There is an argument that producers have few productivity gains left to make on farm and so there is a need to look at how risk and reward is distributed across the chain.

Shining a spotlight on the supply chain will allow us to better understand how the money is apportioned, and whether it is fair and reasonable.

When producer margins are increasingly under threat it is important significant attention is given to the industry structures underpinning the sector to determine where there is room for improvement.

I expect the producers and processors alike to play their role in this inquiry with a genuine focus on making our sector stronger.

Because our beef sector will only improve its international competitive advantage through fierce debate about its practices, standards and general direction.