THE adoption of X-ray technology in objective carcase measurement for robotic automation applications in the beef industry appears to be making progress.

Scott Technology has this week produced this short video clip showing the use of DEXA x-ray carcase scanning and other emerging technologies under trial at JBS Australia’s Dinmore (Qld) beef plant near Ipswich.

While the use of X-ray technology for automation is much further advanced in lamb processing, this is an encouraging sign that advances are also being made in beef. Beef is considered a much harder target species for the technology because of variances in carcase size, and the sheer physical mass of a typical beef carcase compared with lamb.

At the time Mr Pratt indicated that the company still saw the implementation of automated carcase scanning and cutting systems as being ‘some considerable way off’ in terms of commercial application.

However this week’s video (click link above to view) suggests that encouraging progress is being made, with the first application in beef rib cutting, or scribing. The system is arguably the world’s first DEXA-enabled automated beef rib cutting solution.

Meat & Livestock Australia program manager Darryl Heidke says the project, backed by MLA, AMPC, Scott Technology and JBS, had taken learnings from automation and robotics applications in the lamb industry and started to apply these to the beef chain.

“The structure of the beef carcase is more complex than lamb, and the sensing of key points within the carcase is also a bigger challenge for automation and objective measurement,” Mr Heidke said.

Beef side weights could vary from anywhere from 80kg to 300kg, and there were also variations in the numbers of ribs to be cut and the shape of different beef carcases.

Because of that, a complex sensing process is involved in the system installed at Dinmore, including a colour camera, three 3D cameras, as well as the system’s ‘primary enabler’ – dual-energy X-ray (DEXA) scanning equipment.

The 3D scanners are used to scan the carcase and assist in cut placement and transforms the vision processing results for the robot to perform the cut. The colour camera is used to identify a point of interest on the carcase to help determine the correct cut location.

The combination of these technologies plus DEXA allows the ribs to be accurately located in each carcase, and their geometry determined to allow for optimum cutting to take place.

Rib cutting is the first point at which yield can be lost from a carcase during the beef boning process.

The robotic beef rib cutting system demonstrated in the video removed the requirement for the dangerous hand-tool from the line. 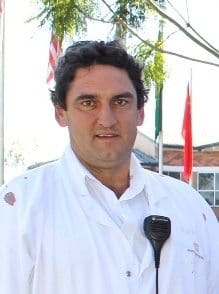 Dinmore plant manager Murray Wilson said prior to the robot being installed, ribs were all cut by hand. Through that process, staff had sustained serious injuries, including amputation.

“When any employee arrives here for a day’s work, they need to go home the same as they arrived each morning. This system alleviates all that employee risk – nobody can be in the proximity of the robot when it is working, and nobody can get cut,” Mr Wilson said.

From a plant performance viewpoint, the robot system optimised the rib cut process each time.

“If we specify the two cuts to be 160mm apart, the robot cuts very rib exactly at that width. With two manual operators sawing one after the other, doing a side every 17 seconds, there can be a lot more variation – 160, 140, 150. So the yield is consistent every time, every cut,” he said.

The automated rib cutting system is capable of operating at line speeds of 520 sides per hour, the video suggests. The system potentially provides a saving of 2-3 operators per working shift, MLA says.

Other advantages identified by MLA include:

Under the system, chilled carcases pass out of the chillers for grading, before moving passing into the rib-cutting room. The system then interrogates the RFID tag in each hook on the chain to determine the cut spec chosen for each specific carcase. The sensor array is then used to analyse the carcase, to determine the cut coordinates to be used by the robot for each particular carcase.

The robot then makes two scribes across the ribs, before the carcase passes out of the system and into the boning room. JBS Australia innovations manager Graham Treffone said being able to invest in the technology had solved the challenge around “the two hardest cutting lines on the carcase.”

“For a long time, the meat processing industry has stood still and been content to do things the way they had been done forever. This is one small step in the meat industry, but it represents a giant step in technology,” Mr Treffone said.

In a comment on the video, MLA managing director Richard Norton said it was critical for MLA to be investing across the value chain, and particularly in automation.