Mr McKenna and SA premier Jay Weatherill this week announced Midfield would invest $60 million in converting the former McCain potato plant at Penola into an export milk powder plant and the company still has plans for a milk processing plant at Warrnambool.

Mr McKenna said although the milk plans would mean the allocation of some of the company’s 8000 hectares in landholdings to milk production, the  investments did not represent a trend away from its traditional beef, sheep and lamb production and processing base.

“Obviously our landholdings are integral to our meat processing facilities. “We won’t be able to convert any more land to dairy.”

“This year we will supply somewhere around 40 million litres, but 12 months off with more expansion and perhaps some acquisitions we may have a considerable amount more. But also we are in the market to buy milk.”

He said Midfield did not expect to process milk at Penola until 2016-17.

“It won’t be until July 2016 when we will be talking about any (milk-buying) commitments.”

The milk processing initiatives are unique for an Australian meat processor, but Mr McKenna said Midfield was a food company.

“Obviously the growth is in food, whether it be dairy, beef or lamb, we can’t forget our traditional roots of lamb, mutton and beef. But we are in a market that is not growing in Australia – the sheep numbers as you know are not growing and the beef numbers are shrinking at the moment because of historically bad years – they are static at the moment,” he said.

“So we see growth for our company in the food industry as in dairy.” 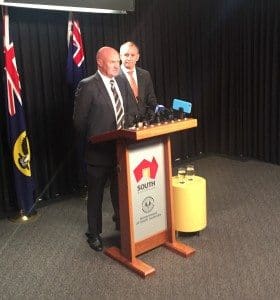 Mr McKenna said there is a lot of milk production potential in SA, but this did not mean Midfield was taking its focus from its home region, around Warrnambool in south-west Victoria.

“Midfield’s milk production 12 years ago would have been about six million litres and now we are talking 40 million litres – so that’s where the growth is. You can’t get that sort of exponential growth in beef or sheep and lamb.”

Midfield has applied for a permit for a milk-drying facility and cold store at Warrnambool, has had State Government planning approval, but is waiting for a decision from the Warrnambool City Council possibly in June after objections from residents.

“The umpire has said it should go ahead, but the council has got to accept that fact and we are sitting waiting. Our plant is already half-built – we’ve got to find a home for it.”

Mr McKenna said Midfield was fully committed to the Warrnambool milk processing plant proposal and would “pursue the permit.”

The SA and Victorian milk processing investments could possibly total $120-$130 million, he said.

“The goal for us, for Midfield, is to grow the milk production, not the company production.

“Lead by example and set the example for the farmers and the young farmers coming through so they say if Midfield is prepared to go and invest in new dairies, dairy farms and milk factories there has got to be something surety there,” Mr McKenna said.

Dairying was not an area that Midfield was unfamiliar with, he said.

“I’ve got a really good team around me, two sons and a great team and we’ll grow, that’s all you can do.”