NEW Zealand technology company, FoodCap has developed a new approach to chilled meat material handling which it is preparing to launch on the world stage at next month’s IFFA meat industry trade show in Frankfurt, Germany.

The FoodCap primal handling system is a reusable bulk chilled meat handling system for buffering, storage, ageing, and transport of red and white meat between primal and case-ready processing lines.

At the heart of the system is the FoodCap, a meat storage capsule.  The FoodCap is robust and seals completely to maintain a modified atmosphere where oxygen is excluded, preventing microbial growth and product deterioration. 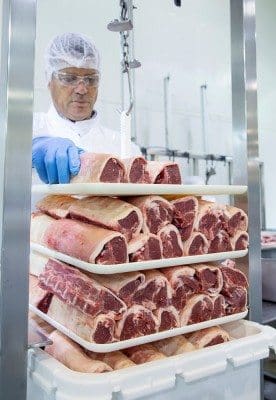 Primal bone-in lamb cuts being loaded into a FoodCap capsule

“The capsule is essentially the vacuum pack and transportation device all in one, eliminating the need for single-use packaging,” he said.

Each capsure stores 110kg to 160kg of meat, either bone in or bone out, meaning greater efficiencies on the production line as well as in storage and handling, Mr Beavis said.

The FoodCap primal handling system is designed to integrate with automated storage and retrieval systems for efficient and accurate handling and inventory management, although it also has the flexibility to be used without automation if required.

There are two versions of the system, used for different applications:

The new technology has been scientifically verified by independent research and development company, Carne Technologies.

Extensive meat science trials have been carried out on beef, lamb, pork and chicken, providing direct comparison between the FoodCap system and conventional vacuum packaging.  Across all species the FoodCap system provided outstanding exclusion of oxygen, low microbial growth and extended storage times.

The system has already been commercially proven, with installations currently operating in meat processing plants in New Zealand and China.

FoodCap’s technology was originally developed as a central processing supply chain for high velocity production and distribution of case-ready meat to supermarkets.

New Zealand grocery company Progressive Enterprises, servicing the national needs of the Woolworths supermarket chain, uses the technology in its centralised multi-species meat processing and packing plants in Auckland, which has to date produced more than 400 million consumer packs of chilled meat. 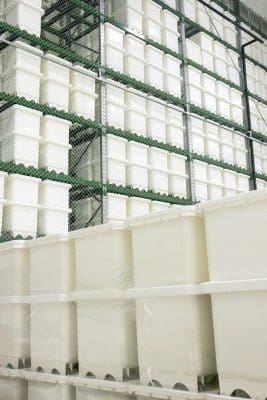 With the plant producing up to 120,000 consumer packs of meat per day, the FoodCap system has eliminated more than 100 million cartons and 110 million vacuum bags that would otherwise have been used in a traditional supply chain.

In 2015, FoodCap installed their technology for Chinese company Little Sheep Meat Industry Co, in their primal lamb processing operation in Bayannur, Inner Mongolia, as part of a project to convert the plant from a frozen to a fresh chilled operation.

Chairman and founder of Little Sheep, Zhang Gang, said his team had scoured the world for three years looking for innovations that would lead to a competitive advantage in the extremely dynamic Chinese marketplace.

“We found such an innovation in the FoodCap Primal Handling technology from New Zealand, a country famed for its fresh chilled meat production and handling,” he said.

“FoodCap not only introduced Little Sheep to their unique chilled material handling system, they introduced us also to a range of specialist companies and technologies which collectively delivered us a world class chilled lamb processing operation.”

Four years of research and development has seen the development of the new primal handling system, which is being launched at the IFFA Expo, the world’s largest meat equipment event, in Frankfurt. This has included further refinement of the original technology, ensuring reliability of operation and ease of application.

“We know we now have a system that is proven to provide a range of benefits, from extending shelf-life and improving food safety, to decreasing manual handling and production costs,” Mr Beavis said.