Five separate industry awards were presented on the night, honouring long-standing and sustained commitment to the processing sector; promising youngsters coming through the ranks; and a new award for females making a big impression in the processing industry.

The night’s ultimate award, the Maersk Distinguished Australian of the Year award, saw a stunned AMIC National Processing Director, Steve Martyn inducted into an elite group of processors, exporters and other industry stakeholders who have received the accolade since 1993. Maersk’s Derek Singline and APC chairman David Larkin congratulate Steve Martyn after he was presented with the Distinguished Australian of the Year award.

The award recognises special individuals who have risen above the day-to-day demands of the industry to provide leadership and direction during crucial periods in the industry’s history.

Mr Martyn was described by AMIC chairman David Larkin as “a great contributor to the Australian meat industry over a period of four decades.”

“He has been involved in many and varied parts of the industry and its organisations,” Mr Larkin said.

An Ag economics graduate from Sydney University, Mr Martyn started working for the old Australian Meat Board, responsible for economics and marketing of Australian meat, working in offices in both WA and SA. In 1982, as an employee of the newly formed  AMLC, he spent  three years in the US representing the Australian industry, later followed by a further three years representing the industry in the Middle East from 1989.

After consulting to the pork industry for a few years, Mr Martyn started work with the Australian Meat Council in 1999, continuing with the new AMIC body following the merger with the National Meat Association. For the past decade he has been AMIC’s national processing director, covering a vast spectrum of industry matters from regulatory reform to market access, trade issues, and government/industry relations.

“Steve has spent the past 16 years as a tireless advocate for processing and the broader red meat industry,” Mr Larkin said. 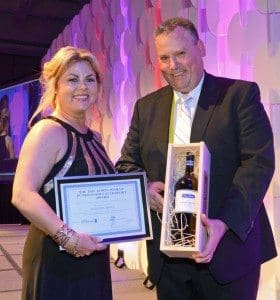 What was impressive about the inaugural Atron Women in Processing award presented last night was the depth of talent and range of skill-sets represented among the nine finalists.

The winner was Angelique Raspin, who has spent 25 years in the processing industry, currently employed as Group Quality Assurance Manager at Australian Lamb, Colac, VIC. With no previous experience in the meat industry, he has excelled in his sales role, concentrating on chilled and frozen beef into southern China, Hong Kong, Europe and Southeast Asia. As outlined in this earlier retrospective published on Beef Central, Dr Barnard has driven the industry’s market access and market information and analysis programs for the past 29 years, and is widely respected for his contribution across all sectors of the red meat industry, from production to processing and export.

He was recently honoured with a valedictory dinner in Canberra, attended by senior industry stakeholders from across all commercial sectors of industry and government.

“I feel extremely fortunate to have been a servant to this great red meat industry over the past 25 years,” Dr Barnard (pictured above left with AMIC chair David Larkin) told last night’s audience.

“I’ve always believed that the real strength of this industry is in producers and processors working together,” he said. “One of the key messages in the recently-completed Meat Industry Strategic Plan (in which Dr Barnard played a crucial guiding role over the past six months), is that that collaborative approach  is the way forward.” 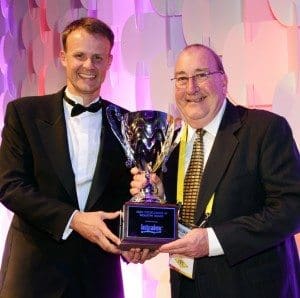 This year’s Intralox Excellence in Industry Award, presented to a supply chain partner who has delivered a sustained and strong contribution to the meat industry in Australia went to processing equipment development and supplier, Brian Carey, from Food Processing Equipment.

“Through his pioneering spirit over the past 30 years, he has had a track record of developing process improvement with the ability to achieve efficiencies for the industry,” said Eric Boxma, Intralox Asia Pacific Corporate Account Manager.