The Angus family’s Signature Onfarm has already started to draw down the loan to finance the development of the new greenfield site near Clermont. 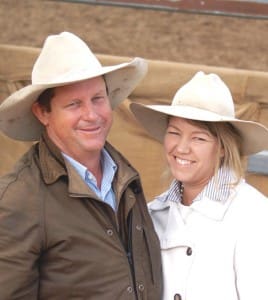 The Federal Government announced it would provide lending support for the project in September 2019.

“The expansion of these facilities will benefit the central Queensland cattle industry, and will create much needed jobs in the region as Australia recovers from the COVID-19 pandemic,” he said.

The Signature Onfarm beef project would create around 200 construction jobs and 70 ongoing jobs once the project is completed, Mr Pitt said.

“The project is being developed by the Angus family who are industry leaders, and will mean local producers have access to an abattoir closer to their farms. Central Queensland is known for its premium beef brand and this NAIF milestone will help to not only re-enforce that brand but continue its growth.”

The project is the first major new processing plant to be built on a greenfield site in Queensland since the construction of the Coominya abattoir west of Brisbane in the 1990s.

In addition to processing cattle under the Angus’ own Signature Beef brand, the new abattoir will give other producers in Central Queensland access to a local, state of the art custom kill service.

The ‘boutique-scale’ facility will seek export accreditation and will have the capacity to process up to 200 cattle per day when fully operational.

A feature will be a unique degree of customisation and specialised processing capability throughout the plant.

“It is designed to be able to be bespoke in how it processes, particularly in the boning room,” Josie Angus explained to Beef Central when the project was launched in 2019.

“Everything is a cellular design so you can be running a different spec on each individual animal and it doesn’t then affect the overall productivity of the boning room because it is that cellular design.

“It is basically one team of people working on one animal rather than a chain scenario.”

Blair Angus said the on-farm facility would eliminate the need for live cattle to be transported interstate for specialist processing services some 1250km away.

“At Signature Beef we pride ourselves on our quality, and having the abattoir just 500 metres from the feedlot will improve animal welfare resulting in a superior finished product,” Mr Angus said.

The project will also include the construction of a workers’ village to cater for up to 70 employees, including abattoir workers and other support staff.

Angus Pastoral Co is a privately-owned, fourth-generation cattle breeding operation that dates back to 1960. Starting with a single farm, the company has grown into a significant supplier of beef, running 35,000 cattle across four properties on 160,000ha of cattle country in Central and North Queensland.

In addition to supplying the domestic market, Angus Pastoral Co has been growing international demand for its premium beef products under its Signature brands for the past 13 years, and this understanding of export markets will assist the company’s expansion plans.

The provision of service kill capacity for CQ producers is a key feature of the new project, and Josie Angus said they believed it will create a healthy environment to have more producer brands operating out of the plant.

“I congratulate the Angus family for their project, which will create jobs and opportunities in central Queensland, while continuing to support a strong vibrant cattle industry,” Ms Landry said.

Mrs Angus said the cattle industry was a key economic driver for Northern Australia and access to local processing had been in decline.

“The loan from the Government’s NAIF alongside our existing financiers ANZ has allowed us to undertake this project to build a state-of-the-art facility focussing on high quality beef output and maximising farm gate returns,” she said.

“We welcome the work put in to seek improvement in the NAIF to allow more projects across the North to access the facility. The beauty of this fund is that the money can keep recycling to generate vital growth in the North.”

“We believe funds like the NAIF are vital to support lending in areas that have often been seen as higher risk,” Mrs Angus said.