Under the scheme of arrangement approved at Scott’s special meeting of shareholders last week, JBS can now move to a 50.1pc controlling stake. It already held 22.2pc of the company before the announcement.

Click here to view Beef Central’s earlier story about JBS’s intention to invest in Scott Technologies, which produces a range of advanced automation and robotics technologies including some already installed in JBS lamb plants in Australia. A commercial trial of similar technology is also taking place in beef, at JBS’s flagship Dinmore Queensland plant.

After the meeting, Scott announced forward orders totalling more than NZ$26 million, the bulk of which was $15 million for its Dunedin-based meat robotics and automation division.

With the JBS capital injection, expansion in the Dunedin facility is now high on the management’s agenda, and with JBS’s share injection, Scott could, in theory, get up to $45 million in new capital, analysts said.

The only remaining requirement for JBS to take a majority stake in Scott is NZ Overseas Investment Office approval, because of sensitivity over a culturally-significant Maori stream which runs through one of Scott’s Kaikorai Valley properties.

”I believe the approval will be a formality,” Scott chairman Stuart McLauchlan said. 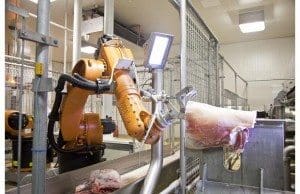 The Scott board earlier this year started looking for a cornerstone shareholder, Mr McLauchlan said, and JBS was already a Scott customer.

With a global turnover of $US55 billion and having invested in 50 complementary companies during the past decade as well as holding a dominant position in the world’s protein sector, JBS offered Scott the opportunity to ‘scale-up’ its manufacturing output, Mr McLauchlan said.

He said the next step was to ‘meet the challenge of expansion’, while chief executive Chris Hopkins said he wanted to double or quadruple Scott’s capacity in the future.

”The objective of the JBS offer is to provide capital to the company,” Mr Hopkins said.

The special meeting attracted shareholder questions, especially about JBS’ long-term intent and whether it would dominate Scott’s work, move the head office, or take its own 50.1pc stake to a 100pc takeover and delist it.

Mr McLauchlan noted that it was not in JBS’s interests to move or delist the company, as JBS wanted Scott’s technology for some of its 300 processing plants.

It would help boost growth, but would not compromise development because future profits could also be made from selling to competitors, he said.

During questiontime, JBS Australia chief executive was asked by a shareholder why the company insisted on a stake above 50 percent.

“It’s a big investment,” he said. “We need to retain some level of control.”

Mr Eastwood pointed to the performance of other companies in which JBS had invested. He said the Pilgrim’s Pride chicken business in the US had gone from a billion dollar annual turnover business taken out of receivership to a six or seven billion dollar a year business in five years.