LAMB processing will cease at JBS Australia’s Longford plant in northern Tasmania for at least four weeks from next week as tight supplies and high prices cut red meat processor margins across Australia.

It’s been a recurring theme in both beef and lamb processing operations in the recent past, following last week’s indefinite closure of the Manildra Meat Co’s Cootamundra beef and lamb plant in NSW, and the Southern Meats abattoir at Goulburn cutting its operating days in the difficult trading environment.

JBS Australia director John Berry said 130 workers at Longford would be stood down for at least four weeks. Only the export lamb processing business at the dual-species Longford plant will be affected, and the beef chain will continue to operate, he said.

“We will review the position during that time and obviously communicate to the workforce and the market with an update before March 24,” Mr Berry said.

“As a company we did not take this decision lightly, we just had a situation where supply has tightened. We’ve seen across the east coast of Australia over the last 12 months a decline in livestock supply, we’ve seen closures and significant cut-backs,” Mr Berry said.

Closure is in best long-term interests of business and workers

Mr Berry said the JBS team has worked hard in southern Australia to continue to maintain product through the Longford plant and the business was an important part of the company’s brand strategy. This included bringing lambs from the mainland in October and November to maintain the Longford throughput, with JBS Australian chief operating officer Sam McConnell and his team looking at all angles on supply, cost and customer access internationally and domestically to make the business strong. 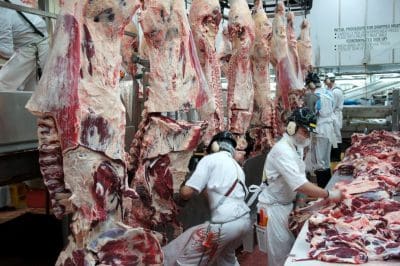 “Unfortunately we’ve hit the wall in terms of supply and this is in the best interests of the business and the workforce in the long-term,” he said.

“But this decision should not be read as we have a broken business, far from it. Sam McConnell and his team in the south have done and continue to do a tremendous job in growing opportunities and have demonstrated that with their strong brand focus and their capacity to sell this product to a broad range of high-value chilled customers, especially internationally and domestically.”

The company had been active in making sure there was a balance between the shortfall in domestic Tasmanian lamb supply and mainland lambs coming over, he said.

“In a perfect world it would be great if all Tasmanian animals were processed in Tasmania, but on a positive front, through our Great Southern farm assurance program  JBS has demonstrated a commitment to go back down the supply chain to work strongly with its producer base to improve productivity, profitability and returns.”

“The next opportunity for our supply chain and the Tasmanian producer is to look at a more consistent turn-off of the right animals throughout the year.”

“We will do everything we can to accommodate them,” Mr Chapman said.

Mr Berry said JBS has a long-term commitment to growing the Longford business and its businesses in other states.

“We’ve been a leader and an innovator in brands and technology, and improved processes,” he said. “But from a buy, make and sell perspective, yes the market is strong and we as a processor can’t control the international market nor the currency.”

Mr Berry said the animal protein industry was highly competitive in Australia and internationally. But Australian and state governments needed to understand that operational costs – whether it be energy or general regulatory costs – play a significant part in the Australian processing sector’s competitiveness against American, Brazilian and New Zealand processors.

“So it’s an integrative perspective – livestock prices are strong for the producers and that’s good.

“But at the same time, there has got to be a much better understanding within the industry at state and federal government levels that this model is not sustainable in its current form, unless we are able to start taking cost out of these processing plants and importantly continuing to gain competitive market access internationally,” Mr Berry said.

An example of this was the timeframe it had taken to finalise an expansion of chilled market for beef and lamb to China.

“China’s not the silver bullet, but it is an example of how the government needs to be working with industry to convert these into real opportunities for the Australian red meat sector,” he said.

Roberts Ltd stock agent Rodney Batchelor said some Tasmanian producers still finishing lambs have the option of retaining them for slaughter when Longford comes back or having them killed at mainland plants.

“A lot of people are keeping lambs for finishing later on and the closure is only for a month, so we are not too worried. The mainland has been taking lots of lambs out of here anyway so it is not going to be a major drama,” he said.