A BIOGAS and water treatment project at JBS Australia’s Dinmore plant has earned an award for innovation in environmental management at the recent Queensland Master Builders Association State Awards. 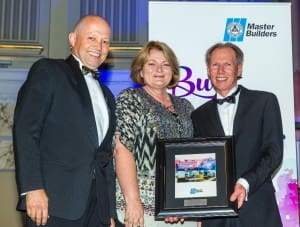 The facility, designed and constructed by engineers and project managers, Wiley, also took out the same category at QMBA’s regional awards earlier this year.

“The award represents a great win for JBS Australia, Wiley and everyone involved,” he said.

Wiley was contracted to design, install and commission the more efficient effluent treatment system to capture and use biogas released by the anaerobic digestion from the new Covered Anaerobic Lagoon (CAL) system as an on-site renewable energy source.

JBS’s Dinmore facility processes up to 1675 cattle per shift, and processing such a large volume of meat and by-products requires a significant amount of energy.

The site currently employs four natural gas-fired boilers producing steam for hot water production and rendering operations. Wastewater is treated on-site through a biological wastewater treatment plant (WWTP) to a high level, enabling 30pc of the water to be re-used within the plant. Prior to the upgrade, the WWTP comprised of four Anaerobic Lagoons (ALs) whose primary function was to remove organic material suspended in the wastewater. These Lagoons emitted odourous and environmentally harmful gas.

The wastewater treatment system was dramatically improved through the installation of new pre- treatment equipment combined with Covered Anaerobic Lagoon (CAL) technology to optimise the generation of biogas for combustion in the existing natural gas-fired boiler plant which was modified to burn biogas.

Not only has the project reduced JBS’s expenditure on natural gas, but it reduced exposure under the previous Federal government’s Carbon Pricing Mechanism, and improved sustainability credentials owing to improved waste management and increased on- site renewable energy consumption, leading to a reduction in the plant’s carbon footprint.

The DAF unit regulates the inclusion of organic solids in the wastewater that passes into the new covered lagoons. The ability to regulate organic solids inclusion rates is essential to optimising biogas generation from the lagoons.

The technology and processes deployed as part of the project is providing valuable insight that will be applied across other JBS meat processing facilities in Australia, as well as being used by the Australian Meat Processor Corporation as part of its industry-wide training and extension activities to disseminate information and findings to other organisations.

This project was the first of its kind in the Australian Red Meat Processing Industry to retro-fit an existing waste water treatment plant.

Wiley says the project is both replicable and scalable within the red meat processing industry and other food processing industries that have a biological waste stream and a need to offset on-site energy requirements for heat and/or power generation.