Product innovation is a risk, but it is a risk the red meat industry must take, undergraduates attending the 2022 Inter-Collegiate Meat Judging National Conference in Wagga Wagga were told yesterday.

SunPork executive general manager, Dr Darryl D’Souza told the audience of 150 university students, most of who are undertaking studies in agriculture, that value-add products had become an integral to SunPork’s business. 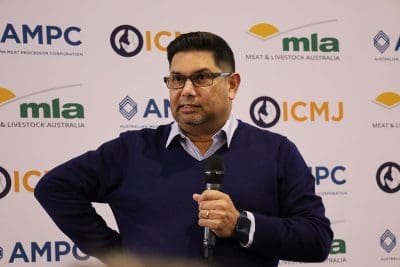 “If you don’t maximise the value of all the cuts within a pork carcase you limit the revenue you get from the sale of that pig and in some instances it could be make-or-break,” he said.

Describing it as a fine balance, Dr D’Souza said the company was constantly innovating with up to 40 product ideas within its various product development stages at any given time.

“For every 10 ideas, maybe one will get through to market,” he said.

“Still to this day I consider our most innovative product to be a pre-cooked, natural sausage with no preservatives or allergens,” he said. “It even came with pre-marked singe marks on the casing to look as though it had been on a grill plate. It was fantastic – but it failed spectacularly and cost hundreds of thousands of dollars.”

But for every failure, there were multiple success stories, including SunPork’s rival to the supermarket hot chook – the grab and go pork roast – borne during the COVID pandemic.

Then there is the company’s paragon of value-add products – its cured and slow-cooked German-style pork knuckle.

The pre-cooked, heat and eat product is derived from one of the lower value cuts of the pig carcase.

“The hock ticks all the boxes – it has reasonable volume, it was previously a very low-value cut, and it’s bullet proof to manufacture and to cook,” Dr D’Souza said.

“Repeat purchases of it continue to grow year-in, year-out. It’s one of those products you think ‘wow, if only all of our products could be like that’.”

Dr D’Souza said the company’s expansion in the value-added space had also extended the range of skills and experience it was looking for in its employees.

Reporting to a dedicated general manager of value-adding business, staff numbers in the department have more than tripled in the last few years.

“But there are a number that have come from within the company and they’re important to have because they understand the processes.”

He said although value-adding was not a new concept to the red meat sector, the key was in spending the time to look for novel ideas that provide something unique.

Dr D’Souza was one of several red meat industry leaders who gave valuable industry insights during the first full day of the 2022 ICMJ National conference at CSU in Wagga Wagga.

The ICMJ National Conference runs over five days from Tuesday to Saturday, 5-9 July and attracts university students and recent graduates from around the world.

Other elements of the program include Q&A panels, interactive workshops, a careers expo, social events and the 2022 National Meat Judging Contest to be held at Teys Australia on Saturday.

The top performers in the national competition are selected to represent Australia on a tour of the United States red meat industry and compete in a US ICMJ competition.