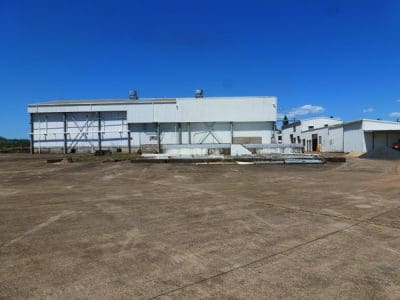 Investor interest is currently being sought for new meat processing construction projects  from Hughenden in northern Queensland to Emerald in central Queensland Roma and Toowoomba in Southern Queensland.

Another proposal will be added to the mix next week, when a meeting is held in Innisfail to gauge producer and financier interest in recommissioning the North Queensland town’s dormant export meatworks.

The Innisfail plant last operated in 2006 when damage caused by Cyclone Larry forced its closure by then-owner Teys Brothers. It had struggled to raise slaughter numbers prior to the arrival of the cyclone, during a period of high live export activity out of northern Australia.

At the time, the 40-year-old plant had the capacity to process up to 700 cattle a day, producing mainly frozen boxed manufacturing beef for export from the Port of Brisbane for the US grinding beef market.

After several years of inactivity, mothballed equipment from the plant was auctioned off in 2011.

There were reports at the time the buyers planned to relocate the carcase chain and coldroom infrastructure to the Solomon Islands, where they reportedly intended to establish an abattoir to support a live cattle export trade from Australia. However the ambitious project did not get off the ground, with a lack of formal cattle trade protocol between Australia and Solomons Islands believed to be one of the main obstacles.

The primary selling point underpinning the Innisfail Meatworks project is that it will require less capital, and take less time, to recommission an existing plant with existing approvals, than it would to build a brand new facility in a new location from scratch.

Innisfail-based engineering firm Maddocks and Associates completed a draft feasibility plan for the Innisfail project a few weeks ago.

Andrew Maddocks told Beef Central on Monday the required capital (to upgrade the plant and initial working capital) is estimated at $34 million.

This was about 40 percent of the cost of building a new plant, he said.

The timeline from project commencement to working at full capacity would be about two years, compared to three to four years for a new plant, he said.

Innisfail has access to nearby cattle producing areas, in particular the Atherton Tableland, where many former dairy operations have recently converted to beef cattle fattening.

A Queensland Government study conducted in 2012 for NorthBeef’s northern abattoir proposal (now focused on Hughenden) showed there were 700,000 cattle in three NQ shires alone (Tablelands, Etheridge and Cook), of which approximately 50,000 were sold for slaughter each year.

Close proximity to the Port of Townsville, 250km to the south, and good access to labour, both in the local coastal location and in Cairns, 100km to the north, were among the proposal’s advantages, he said.

Mr Maddocks said it was envisaged the recommissioned Innisfail plant would handle 300 to 400 cattle per day, and would produce quarter beef for export, with China and other Asian markets likely destinations from Townsville. Removing a boning room function would save a lot of money in establishment costs.

Investors are now being sought to finance the venture.

The meeting in Innisfail next Tuesday, October 11, will aim to gauge producer interest in the project, as both potential suppliers and/or shareholders.

“The ideal situation would be joint grazier/end user ownership with transparent costs through the chain,” Mr Maddocks said.

“Maybe the best way to achieve transparency for graziers is to have some skin in the game.”

While current conditions for meat processing plants are challenging, due largely to tight cattle numbers, Mr Maddocks said with herd rebuilding now occurring, by the time the plant would be due to come into operation, it was likely to find a more favourable supply environment.

Mr Maddocks said his feasibility study showed the re-commissioned plant, compared to a more expensive greenfields facility, stood to produce an attractive return to investors, and he predicted investor support would be secured within six months.

The decommissioned meatworks is currently being offered for sale, in its existing form with infrastructure and 26 hectare site, for a listed price of $1.2 million.