A LANDMARK pay deal has seen around 600 employees at Teys Australia’s Beenleigh export beef processing plant in southeast Queensland receive bonus payments of thousands of dollars each above their wages, because the company made a profit last year.

The industry-first, profit-share deal was negotiated between Teys Australia and Beenleigh employees a year ago, and the bonuses, ranging from $2000 to $6000, were paid this week. Even if every staffmember received a bonus only at the absolute bottom end of that range, it represents a pay-out of about $1.2 million, but in reality the figure is likely to be much more than that.

When the new Enterprise Bargaining Agreement was passed by a vote of employees, Teys labelled it “a new era of cooperative industrial relations”, and thanked staff for “working with the company through a challenging process.”

Teys general manager corporate affairs Tom Maguire said the biggest challenge was overcoming the obstructionist actions of the Australasian Meat Industry Employees Union, representing some of the employees, the, which opposed the deal.

He said while the company and the overwhelming majority of employees were focused on working together for the future, the AMIEU was still trying to overturn the agreement. If successful, the bonuses would be voided, but Teys said it decided to pay the bonuses in spite of union opposition, and will not be asking workers for a refund. 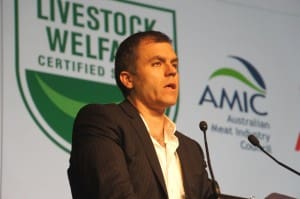 “This EBA – which includes productivity bonuses – is significant not just for the processing sector, but for all manufacturing, because it recognises that to compete in a global market and protect Australian manufacturing and jobs, employers and employees must work together,” Mr Maguire said.

He said it was disappointing that a “broken” IR system had enabled the union to mount continual appeals and hold up the process, and called on the Federal Government to look at “real IR reform” before more manufacturers close their doors, or go offshore.

“The current system, which can become bogged down in legal complexities, creates uncertainty for both employers and employees.”

“Unions like the AMIEU, who remain firmly entrenched in the confrontationist industrial culture of the 1970s, should not be able to use our employees as pawns in their quest for relevance and power,” Mr Maguire said.