Processor Greenham Tasmania has established a unique method of steam generation at its Smithton export abattoir in the state’s northwest, which has reduced carbon emissions to almost zero.

After a $1.3 million investment and several years of refinement, Greenham is now burning 100 percent renewable pyrethrum briquettes in order to power the plant’s main steam boiler. 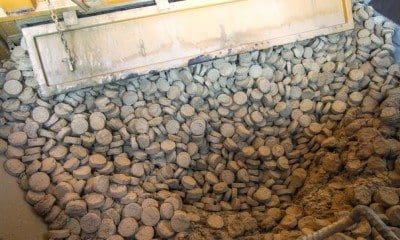 Managing director Peter Greenham said there were plenty of exciting things about what the company was doing with the GHG abatement project.

“Numerous farmers here are producing beef as well as pyrethrum, and now we can ultimately use both,” he said.

“To be able to burn a 100pc renewable resource is so much better than burning coal – and through a pretty big investment in equipment, we have greatly reduced our particulate emissions into the atmosphere,” Mr Greenham said. 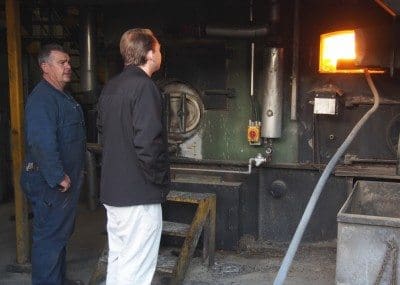 Many Tasmanian farmers in the Cape Grim Beef Producers group grow pyrethrum crops, used to produce a natural insecticide. It is a perennial crop that fits into many mixed-farming operations including beef and annual crop rotations of vegetables, cereals and poppies.

The extracted pyrethrum is used in aerosols for head lice treatments and flea control products for pets. Greenham Tasmania is able to make use of the by-product of the manufacturing process as a green waste bio fuel which is burnt in the plant’s boiler.

“It adds to the great story of Cape Grim Beef where alongside sustainable pasture grazing, we now use 100pc Tasmanian based renewable energy from the hydro and wind scheme as well as powering the boilers with what would normally be a waste product,” he said.

Steam production at the Smithton plant is essential for sterilisation of equipment, cleaning and also powering the rendering cookers on a daily basis.

Federal Member for Braddon, Brett Whiteley said he was impressed by what he saw during a recent tour the Smithton facility, and the new boiler infrastructure.