Greenhouse gas reduction is a hot topic for the sheep and cattle industry, but producers aren’t the only ones targeting emissions. Processors are also putting their money where their emissions are. 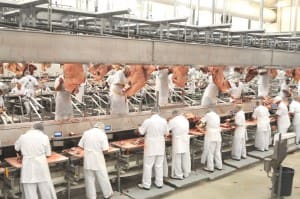 Beef Central first covered the project at its official launch, in this article, “Self-funded Oakey methane project looks to slash millions off energy bill,” back in March.

The project will use covered, high-rate anaerobic lagoon (COHRAL) technology from Europe – a first in Australian meat processing – to harness methane-rich biogas from the facility’s wastewater in the existing anaerobic lagoon system.

Unlike other covered lagoon technology, it has a sub-surface membrane to prevent methane leaks and a novel wastewater distribution and settling system that reduces water retention from 25 to 15 days.

A storage system reserves biogas for peak operating demand, for later use firing the abattoir’s boilers to heat water for sterilisation and rendering.

The system could generate a megawatt of energy each day, slashing the abattoir’s reliance on natural gas by 42 percent, reducing odour to negligible levels and further refining treated wastewater for irrigation and cropping.

The project attracted additional research funding from the Australian Meat Processor Corporation and the MLA Donor Company as a Plant Initiated Project (PIP) to undertake R&D activities and assess the benefits of the technology for the whole processing sector.

AMPC R&D program manager Doug McNicholl said the technology created an opportunity to capture and reuse methane that would otherwise be released into the atmosphere.

“If implemented correctly, it can provide a number of direct and indirect economic, social and environmental benefits to abattoirs, the processing industry and the broader community.”

Oakey abattoir general manager, Pat Gleeson, said his company was looking closely at the plant’s costs and environmental impact, as all meat processors are.

“Energy is a significant operating cost and energy prices are only going one way, so this waste treatment project makes good business sense,” Mr Gleeson said.

“But it’s not just about energy cost savings – there is also a huge environmental management perspective. It demonstrates Oakey’s commitment to the environment and its customers, employees, neighbours and the broader community, to ensure the plant remains a strong and sustainable manufacturer for years to come.”

All eyes will be on the plant when the new pond starts operating in late 2015. Mr Gleeson said that if the system ticked all the boxes, it could be duplicated across the NH Foods abattoirs in Eastern Australia.