A SPECTACULAR orb-shaped green-energy storage facility in its final stages of installation at one of Australia’s largest beef processing plants is helping to demonstrate how industry can profit from environmental initiatives. The 30-metre-high PVC coated sphere, emblazoned with the company’s logos and beef brands, can be seen from kilometres away as travellers pass on the nearby Warrego Highway.

To be commissioned early next year, the facility will allow Oakey to extract green energy biogas in the form of methane from its waste water streams to replace millions of dollars’ worth of natural gas currently consumed at the abattoir.

Beef Central wrote extensively about the project when it was announced earlier this year. Click here to view earlier item.

The flexible storage tank – one of the world’s largest of its type – features resilient double membrane storage so that gas produced by the COHRAL covered lagoon plant can be safely stored separately from the gas generator. Use of the separate flexible tank for gas storage provides security against leakage, with gas securely contained in the tank instead of the current convention in such systems, where gas is contained more ‘loosely’ under lagoon covers.

The Sattler biogas storage design selected for Oakey Beef has been tested and proven in other industries, and is now an integral feature in the design of modern waste water treatment plants worldwide. The system is engineered to be permanently gas-tight with high operational reliability and optimum safety.

“Oakey Beef and its owners Nippon Meat Packers have taken a far-sighted initiative that opens the way to cleaner, greener and more profitable industry performance,” Mr Bambridge said, in a press release.

Oakey’s COHRAL plant is expected to repay its cost of construction inside five years through gas purchase savings amounting to many millions of dollars – then continue to deliver benefits and profitability virtually in perpetuity, Oakey Beef Exports general manager Pat Gleeson said.

The installation of the COHRAL technology by Australian environmental engineering and green energy company, CST Wastewater Solutions, is the first GWE COHRAL installation in the world to be used in a covered lagoon anaerobic application. The system has been well proven in more than 300 enclosed reactor tank installations worldwide, but never before in covered lagoons – an application where it has enormous further potential in countries like Australia, with strong agribusiness sectors.

COHRAL technology – which is applicable to both livestock and cropping operations – uses concentrated anaerobic bacteria to digest 70 percent of the organic matter in Oakey’s waste water to produce effluent of far high quality than typical open lagoons, the press release said.

Oakey Beef Exports, which employs 750 people, adheres to parent company, Nippon Meat Packers’ strict environmental guidelines and corporate responsibility ethic as a major operator across Australia and an exporter of beef to 34 countries.

Mr Bambridge said Oakey’s initiative sets an outstanding precedent for agribusiness in Australia, because the cost-effective technology can turn an environmental problem into profit by simultaneously enhancing water quality and lowering fuel bills.

A major benefit of covered anaerobic lagoons with efficient green energy storage is that the methane biogas produced is not only prevented from escaping into the atmosphere (where it is many times more damaging than C02 emissions) but is also harnessed to generate energy – rather than waste water plants being heavy consumers of energy in processing and oxygenation. 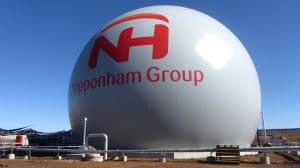 In Oakey’s case, it will re-use of the biogas generated from the system in its boilers, where it is initially expected to replace usage of about 50,000 gigajoules of natural gas a year.

“It also helps companies such as Oakey to guard against future price rises in the cost of energy and  possible future imposts such as a carbon tax,” Mr Bambridge said.

In addition to the obvious waste-to-energy benefits, the process also helps curb odours that emanate from open lagoons in processing plants.

“This is becoming a much bigger issue in Australasia and other countries worldwide as urban encroachment means agribusiness and expanding communities are located much closer to each other than previously,” he said.

“So instead of open lagoons being potential dumping-grounds for environmental problems, closed installations such as Oakey Creek’s represent an outstanding contribution to good community relations.”

“Yet another outstanding benefit is that anaerobic digestion produces reliable and predicable base load power – unlike some other green energy technologies, it is not dependent on the wind blowing or the sun shining.”

COHRAL installations with secure gas storage represent a major advance over open lagoons, and are suitable for solutions involving less technology-intensive applications that allow a long process residence time and where adequate space is available.

COHRAL anaerobic lagoons consist of two zones, with the complete surface of the lagoon being covered with an influent distribution system.

The first and largest zone receives the major part of the incoming wastewater. This reaction zone is where the anaerobic digestion occurs. The second, smaller part of the lagoon serves as a post-digestion and pre-settling zone where a partial clarification of the effluent wastewater takes place. Settled sludge collected in this zone is pumped back to the inlet of the lagoon.

Part of the anaerobic effluent is recycled back to the lagoon. The remaining effluent of the lagoon flows by gravity towards complementary technology such as the GWE proprietary separation technology being used in the first Australian installation at Oakey.

Simplicity and energy efficiency are keynotes of the COHRAL system, with no additional mixing facilities required in the anaerobic lagoon. The distribution system acts as a hydraulic mixing system, converting a standard low load/low efficiency lagoon into a COHRAL system with increased efficiency.

The Sattler biogas storage design selected for Oakey Beef has been tested and proven over decades and now is an integral feature in the design of modern waste water treatment plants worldwide.

They are engineered to be permanently gas-tight with high operational reliability and optimum safety.

The double-membrane gas storage tank consists of an external membrane which forms the outer shape of the tank, as well as an internal membrane and a bottom membrane which make up the actual gas space. A permanently running support air blower provides air to the space between inner and outer membrane, and thus keeps the gas pressure up at a constant level – irrespective of gas supply and gas withdrawal.

Biogas storage systems are an active contribution to the generation of renewable energies, and thus to environmental protection in general. Sattler first developed the double membrane gas holder for storing digester gas from waste water treatment plants in 1981, since applying the technology to concepts for the storage of biogas, liquid manure, or brewery residues worldwide

Anaerobic digestion facilities have been recognised by the United Nations Development program as one of the most useful decentralised sources of energy supply, as they are less capital-intensive than large power plants. They can also benefit local communities by providing local energy supplies and eliminate the need for large and often smelly and environmentally-challenging settling lagoons.

A new Energy Efficiency Information Grants website for processors and others in the red meat value chain was launched this week.

The Australian Meat Industry Council said the project aimed to empower industry associations like AMIC and its members to make informed decisions about energy efficiency, and thereby reduce operational energy costs, and save money.

The central platform for the project is the development of an ‘Energy Efficiency Toolkit’. The key components include an industry energy calculator, an
energy consumption guide, an energy management plan, 23 industry fact sheets covering a range of issues around energy efficiency, six case studies and a webinar with five modules on total plant energy management. The project website can be accessed here.