Are processors still making a quid, at current cattle prices?

WHAT’s happened to beef processor profit margins, since the big shift in cattle prices that started earlier this year?

It’s a question that’s increasingly being posed, given the dramatic rise in livestock prices experienced in eastern Australia in recent months.

The Australian Eastern Young Cattle Indicator is now 50 percent higher than a year ago and it is expected to climb even further. At the same time, processors continue to aggressively bid on slaughter cattle, an indication that at current prices in world markets and thanks to the exchange rate, they’re still making money.

Inquiries to trusted processor sources this week suggest that processor margins generally are now well-back on where they were in the pre-Christmas to January period, but by-and-large remain in the black.

There’s some exceptions to that, however. Processing young slaughter cattle in southern Australia currently looks a loss-making proposition, or breakeven, or at best.

While cattle prices in many categories have risen 25-30pc since pre-Christmas, it needs to be remembered that returns on meat sales (especially export) have changed little over the same period. Some export categories have actually declined in value, despite an A$ which is more or less on par with where it sat late last year.

The 90CL grinding market into the US – arguably among the strongest markets for Australian beef over the past 12 months – is now back about 15pc on its high-point seen late last year.

Presented below are some comparisons on typical processor margins (note: these are actual plant figures, not estimates), comparing profitability in January this year with the current week.

One substantial export plant in Queensland is currently logging profit margins on good cows of $50-$60 per head, down from around $100 a head in January. One the grassfed steer, at heavier weights, current margin (in this particular plant) is around $75, down from $130 in January.

The bigger decline seen in margins on the ox are because the buy price on heavy grassfed steer has risen comparatively more than cow this year.

Note that processing margins will vary from plant to plant, based on a whole catalogue of variables, but we’re confident that the figures presented here are absolutely indicative of financial trends being experienced across the processing industry at present.

In southern Australia, where cattle prices are currently around 10-20c/kg more for both cow and steer, due to shortening in supply, margins currently being logged are less.

One typical southern plant this week was recording margins on good grassfed cows of $25-$30/head, and for the heavy steer, still around $75. The better margin on steer in the south is partly due to the rise in domestic wholesale prices experienced recently, with more body parts diverted into domestic programs in the south than the north.

While processor margins published above are on heavier export type cattle, it’s a different story for southern processors in lighter domestic weight cattle. There is a clear evidence that plants operating from the Riverina area south are now back to breakeven, and perhaps into negative territory, on some of the younger cattle, where the most extreme cattle price rises have been seen.

Cows in the region are still generating a modest profit, but with trade cattle now selling well above 500c/kg in the south, it has savagely reduced any prospect of profit for processors of such cattle.

If cattle prices in Queensland continue rise, to somewhere closer to those being seen in the south at present, what does that do to northern processor margins?

Northern margins will definitely continue to contract, Beef Central is told, but if cattle prices continue to climb, there will be a push among exporters to seek higher market prices for their beef, to offset the impact.

To this point, the only meat market that has shown any evidence of reacting positively to higher cattle prices has been the domestic market. Sooner or later, that pressure has to be exerted on international markets, as well, trade sources say – especially with the A$ sitting as low as it is.

Key trade contacts tell Beef Central that the opportunity exists for processor margins to stay in the black, even if prices rise further – provided there is continued strength in the US market, and there are some subsequent increases in wholesale price in international beef markets.

If there is a real concern in processor margins at present, it is in grainfed, where many descriptions are already showing profits below zero. That’s being driven by higher feeder steer prices, as well as higher feedgrain prices.

And those figures are for cattle exiting the feedlot now, but which went on feed back in February. Currently 100-day steers are worth around 500c/kg in the spot market, while equivalent grassfeds are around 430c.

In four months’ time, with no change to current grainfed beef selling prices on the international stage, cattle going onto feed for 100-day programs today will be in “serious negative territory”, Beef Central has been told.  If that’s the case, something has to give: either feeder prices will decline, or selling prices will go up – or possibly a combination of both.

Why would processors kill cattle at a loss?

When discussing processor profit margins, Beef Central is often asked by readers: “Why would processors kill cattle, if they know they are going to lose money on them?”

The answer is reasonably simple. The Australian beef processing industry today is dramatically different than what it was four or five years ago. ‘Commodity’ beef business is now largely gone, replaced by what is often termed ‘program business,’ built around dedicated supply chains linking loyal, long-term customers back to equally loyal suppliers.

Under such circumstances, simply turning off the tap because there is not a dollar to be made by the processor is out of the question.

Did I hear that right? Producers concerned about processor profitability?

The question of current processor margins came up in an unexpected venue via a question from Victorian beef producer Sergio Beanie from Colac, who was among 350 beef and lamb producers attending a recent JBS Great Southern program supplier day in Melbourne. 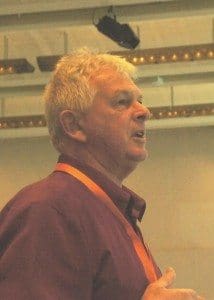 “Always in the beef industry there are winners and losers. All sectors want to be winners all the time, but right now the producers are doing very well at today’s prices,” Mr Beanie said.

“But what happens longer term? We want to know that JBS is also making money (from Great Southern meat) so that we, too, can continue to make money.”

“Livestock prices (both beef and lamb) have risen a long way very quickly,” he said.

“It’s getting to the stage where we can’t pass those costs on to our end-users, as quickly as we need to. It’s a concern, there’s no doubt about it. But we are determined to continue to generate more value-added product.”

“The lamb industry has been going through the same process recently. Lamb has become so expensive that some food service operators, especially in North America, have been taking it off their menus. We don’t want to get to that stage in beef,” Mr McConnell said.

“Everybody along the chain has to have a ‘win’ – that’s what the Great Southern program is all about, and having branded programs like this, we believe can sustainably deliver more value, right along the chain.”

Unexpected – some might say surprising – dialogue like this between a processor and a group of suppliers perhaps reflects the strong relationships emerging between the producer and processors/brand managers in working to achieve profitability and viability across the supply chain.

It also reflects the move from a basic transactional arrangement on selling livestock to alliances and relationships, where both entities work towards a common objective of profitability.