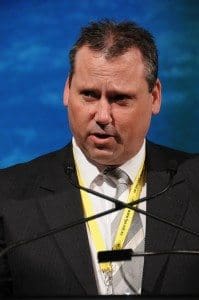 MARKET access, cost of compliance, international competiveness, and automation and robotics were among the topical subjects touched-on during the opening stages of the 2015 Red Meat Industry conference on the Gold Coast this morning.

The annual gathering of meat processors and other stakeholders under the AMIC banner heard an opening address on future labour market trends, and a panel session on challenges and opportunities in the China export market.

In his opening address, Australian Processor Council chairman David Larkin told delegates that Australia’s beef and sheepmeat industries were at a crossroads, with some terrific opportunities both in the Australian domestic market and within export destinations.

“But we’re also facing some significant challenges both from market access as well as challenges in driving greater efficiency in a sometimes fragmented supply chain,” he said.

He said the red meat processing sector was arguably one of the largest trade-exposed manufacturing sectors in Australia.

“The sector has undergone enormous rationalisation and reform over the last few decades in order to remain globally competitive in today’s complex international marketplace. That rationalisation is most likely to continue. Between 1980 and 2005 more than 90 export abattoirs closed their doors, with the social and economic fallout such rationalisation brings with it.”

Only about 15 greenfield sites had been built in that same period.

“As a result of that rationalisation we are producing more processed meat products than ever, from less than half the number of export abattoirs that were operating in 1980, but this achievement has not eventuated without significant cost and sacrifice by the meat processing sector in order to remain competitive,” Mr Larkin said.

The move over the last decade to build strong company brands in concert with ongoing rationalisation had also driven more vertical integration through the industry, in order to put in place production and marketing frameworks that would protect those brands, he said.

“In the drive for greater efficiency and the removal of cost from the sector in what is a high volume/low margin business, both these trends are likely to remain prominent.”

“We should never forget that the domestic market still remains our single largest market globally and is bigger than Japan, Korea, the US or China. The domestic market also brings with it a significantly reduced risk in market access and a better understanding by processors of the market parameters that underpin demand,” Mr Larkin said.

“An export focus then means market access becomes essential if we are to leverage those economies,” he said.

The meat processing sector was facing increasing pressure maintaining its productive base in Australia.

“We’re seeing wage increases without productivity offsets, processing costs that are now twice that of our competitors in South America and the US, increasing government charges and compliance costs, in particular the return to full cost-recovery for export certification – a cost not faced by many of our competitors,” Mr Larkin said.

Added to that were increasing energy costs and transport infrastructure that needed substantial investment in order to meet the efficiency needs of a global competitor in the future.

Despite these disadvantages, Mr Larkin said the Australian red meat processing sector remained globally competitive because of the comparative advantage in the production of red meat that drew heavily on a range of factors, including Australia’s premier health and hygiene status around the world, and the whole-of-life traceability systems that exist in Australia that few global competitors can match.

“In addition the quality, variety and shelf-life of Australian meat products are the envy of many. The quest for lower costs has also encouraged the adoption of the latest technology in our processing facilities. Together with the entrepreneurial skills and professionalism of our export sector and their ability to provide a customised product year round to more than 100 countries, we still see Australia as one of the world’s market leaders in red meat exports despite our high cost environment.”

Mr Larkin suggested one of the ‘megatrends’ in agribusiness over the next decade or two would be increasing demand for high protein foods in Asia, as millions emerged from poverty.

“Australia is in a good position to benefit from this trend, but it is not without competition. As the high-cost supplier in the region, government must not add regulation and compliance costs that undermine that potential,” he said.

“If anything, they should be looking to remove it. The red meat sector will need to respond to the new market pressures that eventuate, including the removal of supply chain inefficiencies and investment in infrastructure at home. Seventy-one percent of the world’s estimated 75pc rise in food demand by 2050 will come from Asia and almost half of that from China. At the same time a new generation of meat exporters such as India and Brazil will provide serious global competition,” he said.

Access for Australia to Asia was not a foregone conclusion, Mr Larkin said.

Realising the potential would require significant capital investment to lift productivity to remain competitive in growing markets and to overcome limitations from aging public infrastructure, capacity constraints and the fact that the sector is still subject to major weather trends and fluctuations making it a difficult investment environment.

“Productivity will define the future success for the Australian red meat sector on the international market,” he said.

An unexpected aberration in recent times had been the triggering of beef import quota arrangements in the US.

“The US Free Trade Agreement gave Australia an additional access to the US market of 70,000 tonnes over 18 years, but shipments to the US have been so strong in 2015 that the quota arrangements have been triggered for the first time in a decade,” Mr Larkin said.

“Those constraints will continue to distort the US market over the 11-week period before first come first served shipments can resume as part of the 2016 quota year about mid‑November. This should highlight to us all the importance of market access to any export orientated industry even in a dependable traditional market like the US.”

“Shipments to the US have been so strong that every aspect of the supply chain has been stretched in accommodating the high shipment levels, especially in US ports of call. This is a competitive business, but it is also great to see that in time of need the major shipping companies relaxed free time constraints in the US in order to allow the volume to be handled more flexibly.

AMIC wrote to the then Minister for Agriculture, Senator Joe Ludwig, in 2012 expressing its frustration with the lack of traction on market access issues.

“While traditional approaches still gave some leverage in mature markets such as the US and the EU, they were clearly not delivering in emerging markets. It was in these emerging markets however where the greatest future potential growth for the industry lay,” he said.

The processing and export sector had implemented a number of initiatives since then to better drive market access outcomes.

The establishment of the Interdepartmental Committee on Market Access involving DFAT, the Department of Agriculture and AMIC in resolving technical barriers, the appointment of the Trade Director-Technical Market Access in AMPC, the formation of the Industry Market Access Advisory Committee (IMAAC) between AMIC and AMPC and the leadership of the cross industry committees established to provide government with a unanimous industry position on each FTA has all been part of that market access push.

On the administrative front, AMIC had initiated an independent review of the AMIC structure, especially as it relates to the processing sector.

A number of ‘compromises’ had occurred in 2003 when the former bodies, the National Meat Association and the Australian Meat Council merged to form AMIC.

“The principle goal was to get everyone in the tent and have one voice from the meat processing and export sector,” Mr Larkin said.

“Twelve years on, there is a need for that evolution process to continue, and we have started that discussion with a target date of June 2016 as one where a more defined structure that more efficiently represents member interests can be achieved.”