Managing director Jason Strong said the company had now consistently gone past the 350 head-per-day tally needed to deliver ‘breakeven’ on the plant’s operations.

“We’re continuing to ratchet up the numbers, but more importantly, it’s now about our operational efficiency and managing the supply and the beef sales out of the plant, and having it form a critical part of our supply chain,” Mr Strong said.

“The way we will be talking about Livingstone going forward will certainly be more about its contribution to the company supply chains, rather than as a specific project.”

Part of Livingstone’s contribution was in the company’s overall objective of capturing as much of the value in the supply chain from every animal that AA Co produces or owns.

Serving to illustrate this, this morning’s briefing used comparisons between the first half of this year with the same period two years ago. Beef sales as a percentage of overall revenue increased from 47 percent in 2013/14, to 80pc in the half-year just reported. 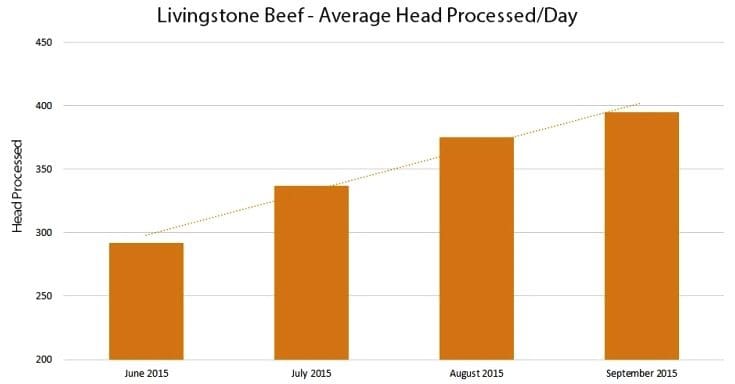 Having passed the 350-head ‘breakeven’ point, the Livingstone plant is still incrementally increasing daily throughput, as illustrated in the above graph, today killing +400 a day, and making a “positive financial contribution to the company,” Mr Strong said.

Referring to the recent disruptions to the US export market as a result of triggering quota management controls some six weeks ago, he said AA Co had managed its supply into the US market – retaining the ability to get higher quality product into the market, while also managing to minimise any impact on sales out of Livingstone by diverting that product to other markets and negotiating long-term favourable agreements with customers in the US.

“It’s minimised any impact from recent developments in the US market, and we’re still running above budget on our price for the product out of Livingstone.”

Mr Strong acknowledged recent press about some of the challenges at the plant on the environmental compliance side. “We’re confident we now have all that in hand. One of the actions we’ve taken is investment in a much larger and different type of water treatment facility, currently going through the approval process,  for which we hope construction will start shortly.”

“Livingstone is up and running – it’s operating extremely well, and it’s forming a very valuable part of our northern supply chain.”

He said slaughter at Livingstone had so far been a mix of AA Co’s own cattle and outside purchases, but had still been predominantly the company’s own cattle to this point.

Asked by Beef Central about the impact of recent Australian cattle price corrections and the slide in US market fortunes, Mr Strong said recent sharp price movements in export beef and cattle only served to highlight the whole reason why AA Co had embarked on the  strategy it had, in optimising its supply chains and retaining value wherever possible.

“Largely, those recent slaughter cattle price movements have had little impact on the execution of our plan over the past six months,” he said.

“The increase in the live cattle feeder price in the north has had some impact on the purchase price of our cattle going into shortfed programs, in buying external cattle. But the change in the slaughter grids has virtually no impact on us anymore, because we spread across that position in the supply chain.”

“Operations at the Livingstone plant is a case where there has been some impact from rising live export prices – which we’ve been able to do, being covered, quite a long way out, with supply.”

While the big decline in the US imported 90CL manufacturing beef price was a ‘really interesting point,’ he said it also had to be remembered that while prices had come back “quite a bit,” they were also significantly higher than where they were two years ago.

“So we’re still way above where we need to be to make the Livingstone numbers work. While we’d all like 730c/kg all the time for lean grinding beef, numbers in the +$6 range still work pretty nicely,” he said.

While Livingstone was originally referred-to as being heavily reliant on the 90CL grinding meat market, the company had now started to harvest up to seven or eight whole muscle cuts off most of the carcases passing through the plant.

“That’s being used for a whole range of purposes, from beef jerky, to export into Korea and Japan.  So we’re now looking at a much smaller percentage of that carcase going into the 90CL market, than what we thought originally,” Mr Strong said.

“It puts more complexity through the boning room and slows-down the fabrication process, rather than simply harvesting everything and throwing it in the same box for grinding meat. Pulling cuts out, wrapping and vac packing is a more complex process, but we’ve managed it OK,” he said.

“The more important thing is that it’s certainly capturing more margin for us. We end up with more revenue, a little more cost, but also more margin than we otherwise would.”

“The two takeaways from these kind of market movement issues is that the big driver for us going down this integrated supply chain route was to get ourselves away from this volatility at specific points in the supply chain, where there can be big shifts in supply and demand,” Mr Strong said.

Mr Strong said the long-term aim at Livingstone was still to process 500 head per shift, two shifts per day, representing about 5000 head per week.

“But we can’t ignore the fact that cattle prices in the north are high; there are quite a lot of sales options for vendors; and the herd is reducing. So we’re not just going to blindly try to increase numbers at Livingstone, to meet that objective.”

“But we’re absolutely committed to increasing numbers and maintaining capacity, when it makes financial sense to do so,” he said.