The Australian Agricultural Co has already started showcasing product representative of that likely to be produced out of its new Darwin beef abattoir when it starts operations in September.

Managing director Jason Strong told an analysts briefing for the company’s latest financial year results yesterday that a series of dummy kills had been performed on company cattle typical of those likely to be slaughtered in Darwin, to provide a preview for both customers, and the company itself. 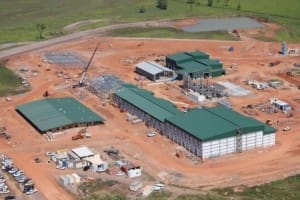 The trial run (presumably using a Queensland export plant offering a beef service kill) had allowed AA Co to ‘take a position’ in the market, and demonstrate to customers how the product was likely to perform.

Mr Strong confirmed that the company’s Brisbane-based branded beef group would be responsible for managing beef sales out of the Darwin plant.

“The trial run meant we won’t be starting the Darwin plant just cold, with customers already having the opportunity to experience the type of product we’ll be producing. That’s allowed us to establish a good customer base, and put some specifications around what the plant will be generating,” he said.

“It has also given us some education about the type of customer we’re likely to be dealing with, and pricing mechanisms.”

From the customer side, it also allowed them to ‘get comfortable’ with AA Co selling a broader range of beef than it traditionally has, and the pricing mechanisms that the company wants to apply.

Mr Strong said the exercise had been ‘very successful’, and the company was comfortable with the relationships that it had been able to build around the trial sample of ‘Darwin beef’. Beef Central understands some of the early beef samples have found their way to the China market.

“It gives us some confidence and security around stable pricing out of the Darwin plant.”

Mr Strong told yesterday’s briefing that the Darwin abattoir project was on track for a ‘soft’ launch during September.

“The Darwin project will be one of the critical parts in our vertical integration strategy,” he said.

“Since the board gave approval for the facility last August, construction has proceeded on-schedule, and we still anticipate commissioning the plant in September this year.”

The start of operations in Darwin will see the return of a slaughter facility on a commercial scale to the region for the first time since the closure of the old Northern Meat Exporters Pty Ltd/Tancreds/Consolidated Meat Group/Teys Brothers facility in Katherine in 2003, due to mounting competitive pressures from live export.

“We anticipate that the plant will be critical in providing another outlet for our own cattle, and opening up new marketing channels for the broader northern cattle herd,” Mr Strong said.

He told analysts yesterday that there was certainly a big capital expense in establishing the plant, with a disproportionate operating expense in opening a new facility in year one, with a whole range of expenses involved in start-up.

“But we’re confident about completion on schedule and managing the project within the budget envelope that we set out with,” he said.

“We’re quite comfortable with our projections around the throughput in the plant. From a supply viewpoint, we’re confident in the supply of cattle required to get the plant up and running and commissioned this financial year.”

“We are conscious of the risks in opening up a new manufacturing facility like this, and the impact it can have on cash flow in the first year, and are planning for that.”

AA Co says it has a ‘whole range of things’ in place surrounding cattle supply, and suggested it has already secured all the slaughter cattle it requires for Darwin for the current financial year’s kill, out to March 31 next year.

“Our intention is not to operate in the spot market to supply slaughter cattle to the plant. Some of the supply commitments we already have are our own (company bred) cattle; others are cattle we have bought earlier, to hold; and some are under supply agreements that we already have locked-in with other northern producers,” Mr Strong said.

“It’s given us some confidence in our plans to set-up multiple sources of supply over time to make sure we can grow the throughput in the plant, as it progresses from a starting point of a half-shift per day, to two shifts a day.”

That process could take two years. The company could manage the transition from one daily shift to two quite easily, but the speed of that transition would be largely demand-driven.

“The faster the demand increases, the quicker we are likely to transition to two shifts,” Mr Strong said.

“By the time we get to March/April next year, we expect to be at a full-shift rate each day,” Mr Strong said.

He said the company was confident around the staffing situation, with an encouraging level of local interest from potential employees. There was quite a large population of people living in the region just to Darwin’s south, and there was a lot of interest from locals who previously had had to commute up to 50km to Darwin each day to work.

Some key positions had already been filled, with people from a range of backgrounds being skilled up for the project.