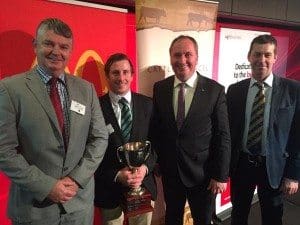 A young cattle producer from Victoria was last night named as the 2015 NAB Agribusiness Rising Champion at a Cattle Council gala dinner at The National Press Club in Canberra.

He is now the 2015 Nab Agribusiness Rising Champion and has the unique opportunity to participate as the next Five Nations Beef Alliance conference from October 18-23 in Durango and Mazatlán Mexico.

Cattle Council President, Howard Smith said the passion and eagerness to learn that all Rising Champions participants demonstrated was invigorating for the industry.

“As the next representatives of the beef industry, I believe we are in good hands if individuals such as these are stepping up into roles at local, state and national levels,” Mr Smith said.

“I look forward to following the progress of each of our Initiative participants and would particularly like to congratulate Kevin and Geoff.”

“I would like to congratulate all participants of the Initiative. The high calibre of this year’s nominees is a demonstration of the beef industries future,” Mr Rose said.