FEELING uncomfortable yet? That question was posed more than once by AuctionsPlus’ CEO Anna Speer to 200 young beef producers on Friday as she took them on a fascinating, and at times confronting, journey into how emerging technologies are rapidly reshaping the rural and global landscape before our eyes. 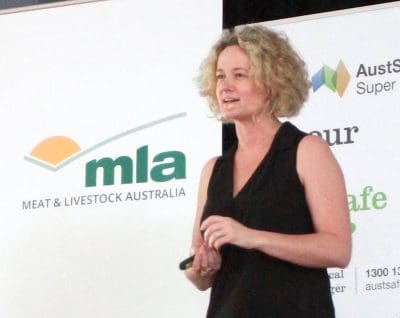 In the past 18 months she has visited Israel, India, California’s Silicon Valley and the United Kingdom to examine new and emerging technologies first hand.

She shared several thought-provoking observations with the young cattle producers of changes that are not only  unfolding, but some that many may not realise have already occurred, and are already disrupting the world as we know it – or knew it?.

Some advances she touched on offer clearly exciting potential to enhance our businesses, our marketplaces and our lives, and perhaps even to extend them: IBM’s Watson artificial-intelligence computer, for example, is making promising progress in advancing cancer research.

But she also challenged the audience’s comfort levels by outlining other examples of new technology that raise the question of how far is too far: For example where companies are now microchipping staff to monitor them, where people’s brains may soon be connected directly to the internet, or where Governments are now using algorithms to rank and manage its citizens according to a social credit score. Big Brother, anyone?

A lasting message is that these sweeping changes, good and bad, are changing lives and industries more quickly and more emphatically than many of us might have imagined, and it pays to pay close attention to how the world is changing around you.

(Spoiler alert! – Anna Speer will be speaking further on this topic at the MLA Business Breakfast at the Alice Springs convention centre on Wednesday morning, so if you’re attending, you may want to wait to hear her full presentation tomorrow)

Wearable technologies and augmented reality: High-tech glasses that people can use to make phone calls, check emails, interact with apps etc. Some predict that within five years these devices will replace smartphones.

Digital armbands/Microchip implants: Some companies are now requiring staff to wear digital arm bands so their activities can be monitored at all times, identifying productivity levels and the number of breaks staff members take each day. Other companies are now micro-chipping their staff, which enables employees to log into company computer systems, open doors or use vending machines.

Autonomous vehicles: In Silicon Valley, Anna said she was surprised to learn how far advanced autonomous cars now are. She had the opportunity to be a passenger in a self-driving car released by Tesla, travelling at 130km per hour in rain down a six-lane highway in a car that drove and changed lines without a human driver.

Mobile abattoirs: The concept of taking abattoirs to the farm via mobile processing plants is not new but is gaining newfound momentum – and start-up investment activity – as a potential solution to the high cost of meat processing in Australia. For those who doubt its potential, Anna offered the example of new super trawlers now plying the seas. These ships are now “80 percent factory”: rather than delivering fish to land-based factories, these trawlers are effectively taking the factory out to the ocean. Some are up to 144 metres long, can store more than 6000 tonnes of fish in freezers and can process about 250 tonnes of fish at sea in one day.

Clean meat: Engineered meat grown in test-tubes from animal cells or produced from plant-based alternatives is emerging as a potentially serious competitor to conventionally grown meat. The emerging industry has adopted the term ‘clean’ meat, trading on its claims that artificially grown meat is more environmentally sustainably and animal-welfare friendly than meat produced through animal agriculture. While some may be tempted to dismiss this as a passing fad, hundreds of millions of dollars of investment by the Chinese government and meat processing giants like Cargill and Tyson in recent months suggest otherwise. “It is getting cheaper and cheaper and it is something we need to be aware of,” Anna said.

Persuasion architecture: Invisible algorithms in search engines and social media sites use data collected on each individual from their online likes, searches, purchasing data, status updates etc to determine what they are more likely to click on. Persuasion architecture is used to serve you posts or search results that site thinks you want to see, and will keep you on that and clicking on posts longer, not necessarily what you need to see. For example two people sitting side by side with smartphones typing the same search term into Google can receive different results, based on what the algorithms think each individual user is more likely to click on. Legislation and regulation isn’t keeping pace with how fast online technology is moving. “Next time you jump on the internet, have a think about if you are seeing something you want to see, or something that the internet is serving up to you.”

Social-credit rankings: A development at the more disturbing end of the spectrum, for anyone who values personal freedom at least. The Chinese Government is developing plans to use online algorithms to monitor its citizens’ behaviour, movements, shopping habits, personal interactions and other criteria to create a ‘social credit system’. It effectively distils the sum total of each citizen’s behaviours, positive or negative, into a single number to determine whether or not they are trustworthy. Their rating is publicly ranked against the entire population and used to determine where citizens can live, where their children can go to school, where they can work, their eligibility for a mortage. Under the currently-voluntary system, some millions of people have been banned from travelling to certain places or travelling on trains because they are not considered trustworthy enough. By 2020, China’s plan is to make this social credit system mandatory for the entire population.