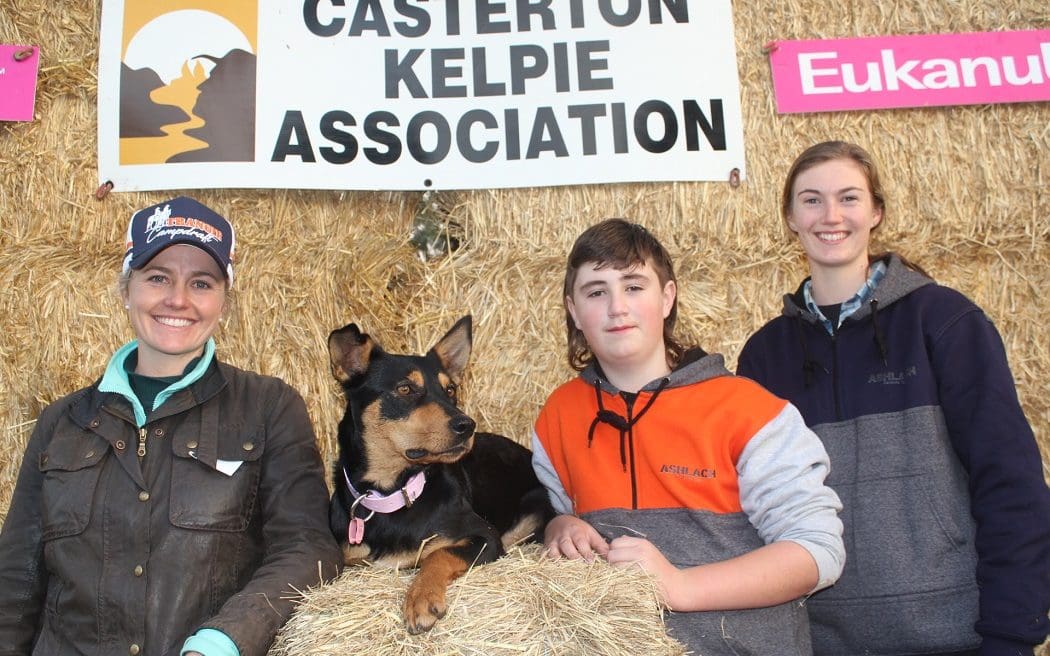 Kimmy was bought by two young Tasmanian farmers Ashley Meaburn, 20, and her 11 year-old brother Lachlan, for their business Ashlach Ag.

The AuctionsPlus-interface auction on Sunday conducted by Riverina agent James Tierney and Hamilton agent Bernie Grant sold 46 of the 49 dogs and pups offered for an average of $8850, up $1194 on last year. The world record price for a Kelpie sold at auction, of $35,200, was set at Casterton’s auction last year by Eulooka Hoover, trained by David Lee at Edenhope, Victoria, and bred by Rob Macklin, Eulooka Kelpie stud.

The top-priced pup in this year’s sale was Tom Austin’s 5.5 month-old red and tan bitch Elfinvale Dusty that made $12,000.

It was 31 year-old Kahlee O’Leary’s first time at the Casterton auction and has sold other dogs at auctions for up to about $4100 seven years ago, and thinks she will be back. She put a $9000 reserve on Kimmy, but this was exceeded by a $13,600 pre-auction bid on AuctionsPlus.

“I bought her up here to sell … and I was blow away by the response on the day, I had a lot of interest from New South Wales, Victoria and Tasmania.”

She described Kimmy as a genuine all-rounder that has worked for other handlers, mustering and in sheds and yard. The bitch has a confident back and bark and is able to work cattle, and manage large mobs of sheep solo. With Kimmy’s friendly and likeable nature, Kahlee said it was hard to let her go.

“Because they are with you every day and they’re your best mate and you want the best for them too, you want them to go to a good home – she will be very well look after.”

Kimmy was bred by Violet Town breeder James Fowler by Gilescreek Reg out of Nomak Meg and sold to Kahlee as an eight week-old pup for $800. Kahlee said a lot of time, effort and patience had gone into training the dog since then.

Kahlee said the $27,000 will help pay for some vet bills and Kimmy’s recently-purchased replacement and she is intending to fund a holiday in New Zealand with a friend.

“So it will be a good trip. But I’ve lost a few dogs and owe a few vet bills.”

Ashley said she liked Kahlee’s practicality and her willingness to work for multiple handlers, but the bitch’s performance in the pre-sale demonstration “set her apart from the others for me.”

“I really wanted something ready to go, really practical for what I wanted, easy, and she is very lovable and friendly dog when you are not working sheep.”

The brother-sister duo run a Merino stud at Oaklands in Tasmania and sell a few rams privately.

“We’ve bought a bit more land for my brother and I.

“It was our first Kelpie dog purchase and she will be a great asset to our growing team.”

Lachlan said: “I think she is a very good purchase.”

Casterton Working Dog Auction Committee chairman Rob Pilmore said the catalogue was the most even ever presented, “hence our average overall has lifted.”

“We thought it was a really good overall catalogue, price-wise, skill-wise and age-wise … there was something in there for everyone and different budgets.”

The number of dogs offered was fewer than in past catalogues, but Mr Pilmore said a number of bitches around 12 months of age were entered, but had to be withdrawn due to coming on heat. Winner of the ABC Muster Dogs series Frank Finger surprised the audience when he purchased Lot 52, Darren Holberg’s 13 week-old red and tan pup Rock to take back to Queensland. AuctionsPlus said there were 26,270 catalogue views and 6978 users connecting to the auction on sale day, connecting from every state in Australia. The 176 active bidders placed a total of 2009 online bids on 48 lots. There were 19 lots sold online, with some lots remaining in Victoria whilst most lots headed interstate to NSW, South Australia and Tasmania.