Work to commence on code of conduct for saleyard buying 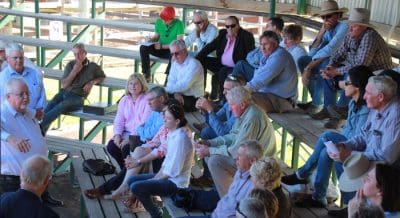 A FLYING delegation of beef industry leaders touched back down in Brisbane last night and tangible results already appear to be taking shape from their two-day tour of meetings with producers in Longreach, Cloncurry, Quilpie and Roma.

The tour brought together leaders from the beef supply chain with a view to developing a cooperative, industry-driven approach to improving levels of trust between the beef production and processing sectors.

The tour, organised by Queensland LNP Senator and Rural and Regional Affairs and Transport Committee chair Barry O’Sullivan, heard producers raise concerns about saleyard buying practices and a perceived lack of transparency in pricing information throughout the chain.

With two key inquiries likely to recommend industry-wide change in coming months, and possibly new Government-imposed rules, there now appears to be a strong commitment within all sectors to find industry-driven solutions.

The ACCC’s market study of the beef cattle supply chain is due to report in November/December, while the Senate RRAT References Committee’s inquiry into the effect of market consolidation on the red meat processing sector is scheduled to report in March next year, a delayed deadline so it can take into account the ACCC’s findings.

Senator O’Sullivan told Beef Central that several developments now likely to occur as a result of the tour, and which build on three years of inquiries and ’thousands of conversations’ with stakeholders throughout the supply chain as part of that process, include:

Senator O’Sullivan said the group that travelled through Queensland over the past few days, including Australian Meat Industry Council, the Australian Meat Processor Corporation, Cattle Council of Australia and Meat & Livestock Australia, was committed to achieving genuine change.