Why nutrition must be at centre of sustainable food policy Not all protein sources are created equal, when it comes human digestibility.

10 grams of protein from one source can be vastly different in terms of nutritional value for humans compared to 10 grams from another source.

This was why nutrition “has to be at the centre of discussions” in global debates about how to produce food sustainably in future, Dr Nick Smith from New Zealand’s Massey University and the Riddet Institute told the Societal Role of Meat global conference in Dublin. 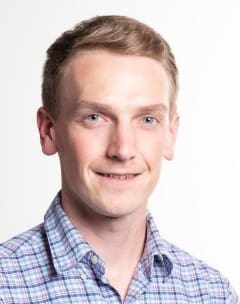 Dr Smith works at the Riddet Institute’s Sustainable Nutrition Initiative (SNi), which is behind the globally recognised “DELTA Model”, a free online tool which aids global understanding of how much “bioavailable” nutrition can be produced from current and future food production systems.

The SNi is an independent research group which receives no funding from the meat industry.

Dr Smith said the debate around sustainable food systems often focuses on environmental impacts and how food production can remain economically feasible into the future.

But the supply of nutrition was equally important.

“Both the United Nations’ definitions of Sustainable Food Systems and the Sustainable Diets are really about delivering nutrition, without compromising on the environmental/economic sides.

“So nutrition really is at the heart of this debate, and we shouldn’t forget about it.” 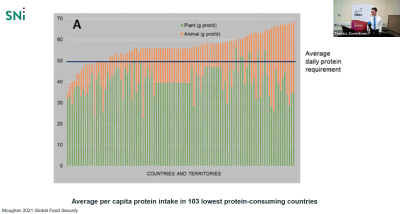 Why do we need to care about bioavailability? The top chart shows average per capita protein consumption in 103 countries with the lowest protein consumption in the world, colour coded by plant sourced (green) and animal sourced protein. The below image (B) is the same chart adjusted for actual digestibility of the protein received. The decrease reflects the lower digestibility of plant sources of protein comared to animal sourced protein. The charts illustrate why we shouldn’t think about nutrition in terms of simple mass of nutrients consumed. Protein has different value depending on the food source. (Click on images to enlarge) – Image source: SNI

Dr Smith presented a series of charts highlighting the important role meat plays in the global supply of nutrition, and more specifically, its effectiveness as a delivery vehicle for ‘bioavailable’ nutrition.

“It depends how easy that protein source is to break down in the gastrointestinal tract, how easy it is to absorb and how the amino acids making up that protein, and how well the amino acid profile matches our own body’s requirements.” 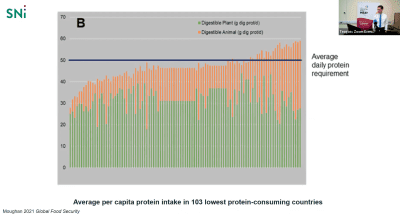 As a result, we shouldn’t think about nutrition simply in terms of the mass of nutrients provided by one source compared to another.

Removing meat from human diets would remove micronutrients such as B12, vitamin A, protein, iron and zinc, which are highly bioavailable from meat.

“Meat protein is highly bioavailable and matches well with our bodily requirements,” he explained.

If meat was removed from the human diet, there would be an increase in plant-sourced energy and protein available, largely from cereals coming in from crops not being grown to feed livestock.

But the additional availability of plant-sourced energy and protein would not make up for the nutrition lost through the disappearance of meat, he said.

Increasing plants in our diets and removing meat would mean we would not gain any B12, or enough Vitamin A.

Iron and Zinc is more richly available from plants, but humans would need to consume larger volumes to meet World Health Organisation recommended intakes, due to bioavailability constraints.

In response to suggestions that nutrient gaps in a non-meat world could simply be filled by supplementing and fortifying plant-based foods with missing nutrients, Dr Smith said he was not aware of any ways to achieve this at a global scale.

It is known that there is a high burden of malnutrition and childhood stunting in many populations where there is lower meat consumption, but increasing meat consumption is not always feasible due to issues such as culture, accessibility, affordability and individual choice.

“When making any recommendations or changes to meat consumption we need to think about which individuals, which demographics or which countries that is going to impact, and whether that really fits with what we need from that specific population.”

He said that meat is important to the global nutrient supply, and that nutrition “has to be at the centre of this debate”.

“If we’re talking about sustainable food systems, yes we need to be environmentally, economically and socio-culturally sustainable, but if you’re not feeding people you’re not sustainable, so nutrition has to be at that table.”