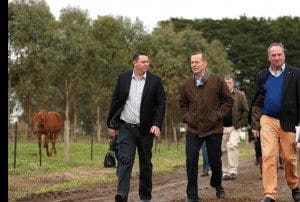 Initial reaction from farm representative groups and other associated bodies to the Abbott Government’s Agricultural Competitiveness White Paper released on Saturday has been largely positive.

The white paper contains a range of funding initiatives which the Government believes will create a stronger business environment for farmers and generate stronger returns at the farm gate.

Various farm groups said the Government had taken on board many of their concerns and proposed solutions in formulating the white paper.

As AgForce general president Grant Maudsley stated on Saturday, the ultimate measure of its success will be the effect it has on the profitability of farmers.

The National Farmers Federation said the package contains “a host of valuable initiatives to boost farm profitability and competitiveness”.

“We finally have a clear commitment from government to foster a stronger, more prosperous and vibrant agriculture sector,” NFF president Brent Finlay said.

“The White Paper, alongside the Northern Australia White Paper, the Food and Agribusiness Growth Centre, Austrade’s renewed focus on Brand Australia and other key announcements over the year, together create the environment for agriculture to reach its full potential.”

The NFF says the allocation of $11.4 million for an ACCC Agriculture Commissioner to support fairer supply chain outcomes was a policy it has long called for.

“These changes will help strengthen the resilience of farm businesses, and ensure farmers get a fairer deal from their banks, allowing investments to offset farm debt.”

The NFF said its vision for Australian agriculture is to double the value of production by 2030. Notable elements of the white paper on that front included the $100 million to extend the Rural R&D for Profit Program to 2021-22; the focus on advanced technology, biosecurity, soil and natural resource management research; and the additional $100 million to support pest and weed management.

The current Drought Concessional Loans Scheme will be replaced with a permanent, low interest loan scheme for drought-affected farmers, capped at $250 million per year for 10 years.

“We hope that the new loan scheme, effective from 1 July 2016, will address some of our key concerns and deliver an effective and lasting drought support mechanism,” Mr Finlay said.

The Government’s commitment to match costs of up to $2,500 for advice and assessment on insurance options, including multi-peril crop insurance was an important preparedness measure and would be welcome news for many farmers, the NFF said.

“The new National Water Infrastructure Development Fund has huge potential and we look forward to working closely with government on plans for new water assets.”

The extra $200 million over four years to strengthen biosecurity surveillance and deliver more advanced biosecurity data systems, and $30 million to fund overseas agricultural counsellors to help overcome technical barriers to trade, currently inhibiting industries such as horticulture, rice and pork, were also singled out by the NFF as positive measures.

Cattle Council of Australia said the package was a positive initiative which will assist to deliver the long-term vision of the Australian beef industry.

In particular the council singled out the $30 million for funding towards overseas agricultural counsellors as a welcome move that would improve Australia’s ability to deal with technical trade barriers. “The red meat sector has been calling for this over the past decade,” said CCA president Howard Smith.

The $200 million for biosecurity was a timely initiative just as weaknesses in Australia’s system were becoming critical. However, it was important to note that this was really just replacing money that previous Governments had withdrawn from agriculture over the past decade.

One area in which the paper fell short was in delivering initiatives to improve objective measurements on which producers can be paid for their product. “If we want producers to make a quality product we have to pay them based on objective quality measures otherwise we will remain a price taking commodity producer,” Mr Smith said.

The council said other initiatives that should be positive for cattle producers included the $500 million investment for long term improvements into water infrastructure, $1million for planning of agricultural infrastructure priorities, the extra $60 million for the already $100m Mobile Black Spot Program, the expansion of the CSIRO’s TRAnsport Network Strategic Investment Tool (TRANSIT) to identify critical areas of infrastructure investment, the $100m investment in rural RD&E and the $11.4million towards the appointment of an agriculture commission with ACCC. This would see a dedication for the investigation into the trends of consolidation in major beef processing plants throughout Australia, Mr Smith said.

AgForce president Grant Maudsley said the Federal Government had listened to the group’s concerns many of the initiatives in the white paper were highlighted in AgForce’s recent member survey.

He said that the ultimate measure of its success “will be its effect on the profitability of farmers”.

NSW Farmers said the initiatives included in the white paper will lower the cost base, boost productivity and provide higher farm-gate returns for producers.

President Fiona Simson said the association has been lobbying the Government to give ACCC expertise in the agricultural sector and considered the intiative a “big win”.

The new drought-relieve package would provide policy certainty for primary producers, while the association also praised the white paper’s drought preparedness measures, including the ability for Farm Management Deposits to be used as offset loans, estimated to save farmers up to $150 million.

“This is clever policy that will encourage good risk management”

“This is clever policy that will encourage good risk management,” Ms Simson said.

“There has never been a better time to be in agriculture and we congratulate the government and the Agriculture Minister Barnaby Joyce for recognising the value of agriculture to the Australian economy.

“People will always need to eat. Food is the future and agriculture is the enabler.”

The Australian Competition and Consumer Commission says it welcomes the Federal Government’s allocation of $11.4 million over four years to establish an Agricultural Enforcement and Engagement Unit with additional staff to conduct investigations and engagement in rural and regional areas.

“The ACCC will prioritise detecting, deterring and taking action against conduct that breaches the Competition and Consumer Act (2010) (CCA) that affects farmers and small businesses in rural and regional areas, particularly cartels, misuse of market power, and misleading or unconscionable conduct,” Acting Chair Delia Rickard said.

“The ACCC will strengthen its engagement with agricultural industries to understand factors effecting competition in rural and regional markets. This will also enable the ACCC to better explain its decisions to farmers and regional small businesses.”

The government announcement gives the ACCC additional resources, but not new powers. The ACCC already has powers under the CCA and currently prioritises truth in labelling, cartels, and unlawful arrangements that have the purpose or likely effect of substantially lessening competition.