Where does RSPCA stand on militant anti-farm activism?

Although the charity has said it condemns illegal activist activity, the body’s reluctance to declare its support for RSPCA Approved farmers or the rights of livestock producers generally has caused farmers and farm leaders to question its true nature and intent.

On its website, the RSPCA says it works with farming’s peak bodies to develop animal welfare standards and effect positive change in animal husbandry and management. It also works directly with farmers who choose to participate in its Approved Farming Scheme and the Beef Cattle Welfare Challenge.

The RSPCA has developed animal welfare standards for the care of layer hens, pigs, meat chickens, turkeys and dairy veal, collecting royalties from companies wanting to use ‘RSPCA Approved’ branding on products.

The body has refused to publicly confirm or deny whether there had been any activist incursions on accredited RSPCA Approved farms in case they were targeted, although Sheep Central has been told the body has advised farmers on how to deal with trespassing protestors and media enquiries.

‘Hypocrisy on a massive scale’: Farmer

However, northern Victorian beef producer Frank Tobin, initially on ABC radio this week, has called out the RSPCA for not publicly supporting its ‘approved’ farmers and livestock farming generally, after the latest spate of vegan activist trespass actions. 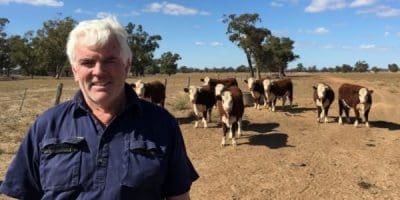 Mr Tobin said it was “hypocrisy on a massive scale” for the RSPCA to collect millions of dollars in royalties associated with livestock production, but not publicly declare its support for ‘approved’ farmers.

“The fact that the RSPCA has even one farm with their brand on it means that they have some skin in the game – they are backing their brand on the back of farmers changing their practices.

“They are deadly silent that’s my point, or is the question that needs to be asked of the RSPCA: Are you quietly happy sitting back letting this mob of radicals do your bidding for you and knowing that they are promoting the hidden agenda of some of the radical elements within your ranks?”

Mr Tobin said the RSPCA should justify why farmers ought to subscribe to its RSPCA Approved Farming Scheme when it will not come out and back them when activists trespass on farms and in processing plants.

He asked why farmers are battling activists on their own when many groups — including grocery retailers like Coles, Woolworths and ALDI — were prepared to promote Australian-sourced product and use ‘clean green’ farm provenance images and branding without supporting farmers publicly during the spate of activist protests.

“There are a lot of groups who are making money at our expense and they won’t come and back us – it goes to everyone who trades off farmers, they should be coming out and back us and our programs.

“Farmers, at their cost, are continually having to defend their right to farm when a huge section of the community, which makes a shit-load of money out of us and know how good our programs are not supporting us,” he said.

“The silence from these groups is bloody deafening.”

He said farmers spent a lot of money developing their production programs to get RSPCA, retailer and community approval.

“But when it comes to the crunch, these mobs are silent – everybody who makes money out of farming should be out there supporting farming.”

Mr Tobin considered that the RSPCA Approved Farming Scheme was saying that what accredited farmers were doing in looking after their animals was “right,” while “this mob of radical vegans are wrong.”

“That needs to be communicated to the general population who don’t understand what is going on behind the scenes.”

‘Silence tells you the answer doesn’t it’: VFF

Victorian Farmers Federation Livestock president Leonard Vallance said despite the RSPCA Approved scheme he did not expect the charity to defend farmers’ rights. He believed the RSPCA is complicit on the issue of vegan activism and he interpreted the RSPCA’s silence in publicly backing farmers as tacit support for the activists.

“We’ve seen a change in recent times in the RSPCA’s political activity – they are now an activist group and I don’t believe they have much credibility these days.

“They are not interested in commercial farming, they are now a lobby or activist group,” he said.

Mr Vallance asked if the RSPCA believed its RSPCA Approved program is the ‘gold standard’ on animal welfare, why has the body not publicly supported it against vegan activism?

“They (the RSPCA) either supports legitimate animal production systems or they automatically default to being seen as an activist group supporting veganism.

“Silence tells you the answer doesn’t it?”

And where are the food retailers?

Mr Vallance said the public has clearly shown their support for farmers on social media, but major food retailers should also be coming out in support of farmers providing food choices to consumers.

“It’s about the freedom of choice to eat the food that you want to eat, that’s our stance on this.

“We’re coming up to Anzac Day and men and women died all over the world so we could enjoy the freedom to make the choices we have now and one of the basic human needs is to eat food,” he said.

“This is an issue that the food industry needs to unite over.”

RSPCA condemns illegal activism, but offers no support for farmers

In a series of responses to Sheep Central questions this week, the RSPCA pointed that it did not support illegal activity in the pursuit of animal welfare objectives. However, the body seemed unable or unwilling to declare any support for farmers operating legally, least of all those accredited under its RSPCA Approved program.

RSPCA Australia said in comments mainly attributed to chairman Gary Humphries that it was a law enforcement organisation and it is recognised and trusted as Australia’s leading animal welfare organisation by the vast majority of the community.

“The RSPCA continues to work closely with farmers and farming industry, as it always has, to achieve sustainable and positive improvements in animal welfare,” the RSPCA said.

RSPCA Australia said farmers do not pay to be part of the RSPCA Approved farming scheme, which is not for profit.

“Royalty payments received from companies marketing the products as RSPCA Approved are used to fund the scheme.

“In some cases, the brand is the farmer – i.e. the farmer selling products under their own brand – but most often, this is not the case.”

At the time of going to press, RSPCA Australia had not said why it has not publicly supported farmers accredited in the RSPCA Approved scheme. Click here for more information about the RSPCA Aprroved Farming Scheme.

An RSPCA media officer directed Sheep Central to a recent opinion piece by RSPCA Australia chairman Gary Humphries published last month, in which he states that the RSPCA “wholeheartedly condemns law-breaking behaviour”, though again without offering any support for law-abiding farmers.

In the opinion piece, Mr Humphries said that calls for tougher laws to make it easier to prosecute activists are “understandable, but short-sighted”, instead suggesting that the agricultural sector’s approach must be focused “more on winning hearts and minds than court battles.”

Mr Humphries pointed out that the risk for livestock industries is that activists, not farmers, are taking control of the narrative and gaining influence over everyday Australians, especially younger generations.

Mr Humphries mentions that a recent study Australias Shifting Mindset on Farm Animal Welfare found that many of the respondents now support the view “animal welfare isn’t being sufficiently delivered by the agricultural sector for today’s values.” However, the RSPCA has not said whether it agreed with this view.

Sheep Central also asked Coles, Woolworth and ALDI Australia why they have been silent in offering support for farmer suppliers after the recent activist actions and what were their stances on vegan activism.

A Woolworths spokesperson said Sheep Central was the first to ask them about their stance on vegan activism, but nevertheless offered no position.

“At Woolworths, we’re proud to work closely with Australian farmers and producers to offer top quality red meat for our customers.

“Australian grown beef and lamb have long been an important part of our range and we continue to invest in promoting these products to our customers in support of local producers.”

An ALDI Australia media officer said she unfortunately unable to provide a comment on behalf of the company, but directed Sheep Central to background information on ALDI’s commitments to animal welfare.

No response was received from Coles at the time this article was published.

Sheep Central has also asked the RSPCA how much it generates from RSPCA Approved royalties, whether all royalty monies are spent in running the schemes and what is done with surplus funds.

NFF: RSPCA should publicly affirm its policy on the livestock sector

National Farmers Federation chief executive officer Tony Mahar said the RSPCA has a history of working proactively with the farm sector to improve farm animal welfare, including through its RSPCA Approved scheme for chicken, pork, turkey and eggs.

“The RSPCA’s stated policy is that the needs of individual animals can be met while also providing the community with food and fibre, and having a productive and profitable livestock sector.

“This is entirely inconsistent with the views and actions of the extremists who are invading farms across the country and believe that animals should not be kept for human use – even as pets.

“We would urge the RSPCA to publicly affirm its policy on the livestock sector, and not let its reputation be tarnished by any speculation that it is linked with the actions of these extremists,” Mr Mahar said.