What goes faster – farmers or racehorses?

The recent running of the Melbourne Cup provided an opportunity to compare the productivity gains by the thoroughbred racing industry and the Australian farm sector.

By using improvements in the time of the winning horse as a proxy for productivity gains by the thoroughbred industry, and the recently published national agricultural productivity growth figures for Australia published by the US Department of Agriculture an interesting comparison can be made.

Which sector do you think has enjoyed the greatest ‘productivity growth’?

The following graph displays the results of the comparison. It shows both Melbourne Cup winning times and Australian agricultural productivity indexed at 100 in 1961 (the Melbourne Cup was won that year by Lord Fury), with improvements since then reflected in changes in the respective indices. Interestingly, the 2016 winner Almandin would have finished a second behind the 1961 winner. 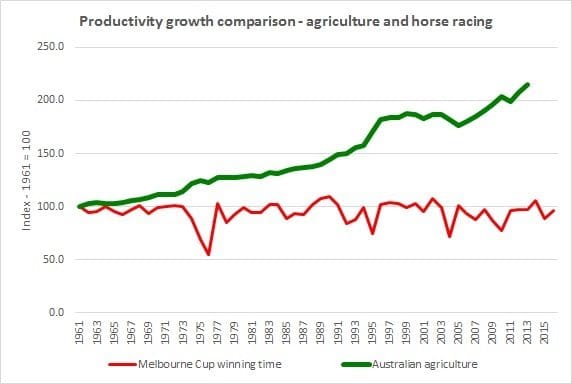 The graph reinforces the very impressive productivity performance that has been achieved by Australian agriculture over this period. In simple terms, if this change in productivity had not been achieved, the Australian farm sector would need to use twice as much land and water as it does at present to produce the same amount of food and fibre.

It is worth noting that the thoroughbred racing industry does not use modern genetic or reproductive technology, and there does not appear to have been any performance improvements made over the past fifty years. In fact, the trajectory of improvement in finishing times (see graph below) is broadly what doomsayers such as Malthus and Ehrlich anticipated would occur to global food production and which led them to predict imminent world famines. 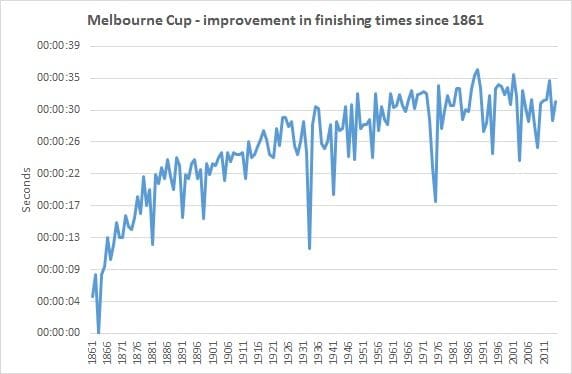 Those who are critical of modern farming methods including the adoption of new technologies, agricultural chemicals and GMOs, might like to use the above comparison to better understand what the world food supply situation would actually be in the absence of these.