‘We were given an airport, we might as well use it’ HOW much ‘guts’ does it take for a small regional economic development agency to charter an international passenger jet to China?

What was achieved yesterday when a Qantas A330 jet became the first international passenger flight to leave Toowoomba’s new privately built airport, headed for Shanghai, cannot be underestimated.

It began with a conversation after boarding a plane in Xian two years ago.

For four days John Wagner and Ben Lyons had been travelling with a small delegation of Toowoomba-region business owners exploring export opportunities to China.

Toowoomba is the hub of a diverse and productive region brimming with active or aspiring exporters. They include beef processors, grain growers, flour millers, fruit and vegetable producers, agricultural machinery manufacturers, mining equipment suppliers, agri-investment and advisory specialists, the list goes on.

It is also now famously home to Australia’s newest international airport, privately built by Toowoomba’s Wagner family in what was a cattle paddock 10km west of the regional city in 2014.

A key task of the local economic development agency, the Toowoomba Surat Basin Enterprise, has become to make full use of the airport to develop trade opportunities for the region’s businesses.

This is one group that cannot be accused of sitting back and simply waiting for opportunities to happen.

When TSBE CEO Ben Lyons joined the organisation in October last year he brought invaluable knowledge and trade contacts from having lived and worked in China for the previous 18 years.

Back on that plane in Xian in November 2014, Wagner Group John Wagner told Ben Lyons that more people had to see the China opportunity.

“John said this has been an amazing four days, people need to see this,” Dr Lyons recalled.

“And the feeling was that China was only just starting. You haven’t missed the start of the boom.”

Travelling with the group was Jamie Kennedy from air charting company Aergo.

Some calls were made, quotes were obtained, and suddenly the idea of chartering a huge international passenger jet from Toowoomba to Shanghai was set in motion.

It has taken an incredible behind-the-scenes effort by a small team of four TSBE staff, including one based in Shanghai, to get this week’s tour to take-off.

Thousands of phone calls, and tens of thousands of emails, asking various businesses to commit to spending around $6000 each for a five-day trip to take advantage of the trade opportunities China has to offer.

Plenty of expressions of interest but many nervous moments waiting to see how many would convert into actual commitments.

At any point along the way it would have been easy to declare it all too hard, acknowledging that in reality it was too ambitious a goal.

They stuck to the task and the result has been extraordinary.

This statement may be open to challenge, but we understand this is largest privately-led business charter in Australian history.

When was the last time a business development group from a region of less than 200,000 people achieved something of this scale?

It is also worth noting that this has been a 100 percent privately-funded venture.

While some local, State and Federal Government representatives are travelling with the delegation, and supporting it heavily through their involvement, there is no Government funding behind it.

One key source of support came privately from large-scale Australian agribusiness investor Mr Wu Pui Ngai, the Chinese billionaire who owns Shanghao Zhongu, who personally contributed $25,000 because of the value he saw in the tour’s Australian-Chinese trade building opportunities.

The Access China ’16 ‘super charter’ is already generating massive media interest both here and in China.

But this is no mere PR stunt.

The trade opportunities now available to exporters in the Toowoomba region are real and genuine.

This has been helped in no small way by the announcement last week that Cathay Pacific will begin weekly international cargo flights from the Wellcamp airport to Hong Kong in November, opening a direct trade pathway for the region’s exporters straight into Asia. 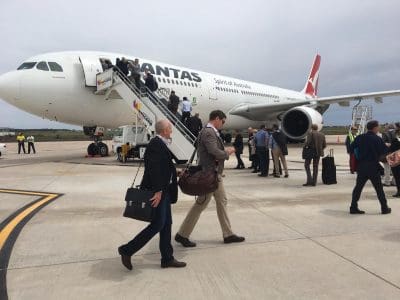 Delegates board the A330 bound for Shanghai at Toowoomba’s Brisbane West Wellcamp Airport on Sunday.

Many businesses travelling on this week’s tour will meet with carefully-matched Chinese importers over the next five days with a view to building on the incredible opportunity the new airport and weekly freight flight has provided for them.

210 delegates were on yesterday’s flight. Another 12 will join the tour in China.

Hundreds of individually-tailored business-matching meetings have been organised in advance.

More than 180 hotel rooms have been filled.

The small TSBE team has also somehow managed to organise a full-day Access China conference which is being held in Shanghai today, involving no less than individual 45 speakers.

250 people will attend a gala dinner tonight, where Stanbroke beef will feature on the menu.

For the remainder of the week site tours, customer meetings and business networking events will be held.

Two years on from that initial conversation with John Wagner on a plane in Xian, what is the feeling now it has actually come to fruition?

“It is part of history.

“We will look back on this as a milestone, and it ties in very well with the launch of the freight flight.

‘We are looking at helping companies get new business from that flight and make use of it.

“We have been given an airport, why not make use of it?”

When the Wagners first flagged their plans to build a new airport, John Wagner said they were told they were crazy. When they built it and then began making arrangements for a trial international cargo flight, the initial reaction was similar.

By now people should be getting the message these guys are serious.

Every time they say they are going to do something, it happens.

Backed by its new airport and an economic development agency leaving no stone unturned in making use of it, the Toowoomba region is truly taking off.