It has been a roller coaster ride for Meat & Livestock Australia’s red meat advertising campaigns in recent weeks.

The levy-funded red meat marketing and research body last week received bouquets for its latest national lamb advertising campaign ‘Make Lamb Not Walls’, which took out the ‘TV Ad of the year’ and ‘Ad Campaign of the Year’ at The Mumbrella marketing industry awards.

Amidst that success came brickbacks as well from some viewers who labelled MLA’s latest beef ad, developed to coincide with the Tokyo 2020 Olympics, as “sexist” and “misogynistic”, with their complaints sparking an investigation by Australia’s advertising standards body.

The advertisement (below) features Australian Olympic javelin thrower and reigning world champion, Kelsey-Lee Barber, and her brother “Greg” at a dinner table reaching simultaneously with their forks for the last piece of beef.

Kelsey comments that she is working towards breaking a record at the Olympics while Greg replies that he too has a record to break, as the advert cuts to footage of him at a local games arcade competing on a dance machine. The mum then comments that Greg has been “trying to break that record for years” and suggests Kelsey let Greg have the last piece of beef, before the advert closes with the line “Packed with protein. Feed your everyday greatness with beef.”

The Ad Standards Community Panel said it received complaints – the number of which were not disclosed – expressing concern that the ad was sexist “by suggesting that the man is more worthy than the woman”.

However, after investigating the advertisment the panel dismissed the complaints, ruling it did not portray or depict material in a way which discriminated against or vilified a person or section of the community on account of gender. 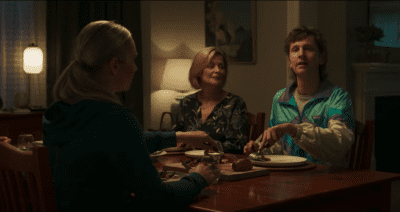 The Panel said it considered that the relationship depicted was not related to gender but rather was indicative of sibling rivalry and the content of the advertisement did not show the woman to receive unfair or less favourable treatment because of her gender, and did not humiliate, intimidate or incite hatred, contempt or ridicule of the woman because of her gender.

In its submission to the panel, MLA said the context of the advert was that greatness means different things to different people – “from the heights of Olympic athletic achievement to more day to day achievements which are nevertheless equally important to the person trying to achieve their personal best in their own way”.

The message of the advert was that “whatever your personal greatness, you can help feed it with the natural source of protein in beef”.

“The advert conveys that beef has benefits for everyone, not just elite athletes – and it uses a humorous and obviously dramatized depiction of sibling rivalry to convey this message.

“… MLA strongly rejects the assertions that the advert is discriminatory or vilifying on account of gender in any way. The reasonable viewer is likely to appreciate that the advert plays on friendly sibling rivalry to convey the message that beef has benefits for everyone – not just elite athletes.”

MLA’s beef and lamb ads have won numerous marketing industry awards but have also been the target of complaints 32 times in  the past 23 years, according to the Ad Standards website.

However, the record also shows that most complaints have lacked substance, with only two being upheld in that time.

One was a 2017 lamb advertisement which depicted “various religious/mythical leaders/Gods/characters” seated around a table enjoying a meal together, in which the board ruled the advertiser had not given adequate consideration “to how seriously some Australians take their religious views”.

The other was a 2009 four-page print advertorial in which each page was marked as an advertisement and which repeated the theme “Red Meat – We were meant to eat it”. The board determined that, while much of the nutritional and dietary information  contained in the advertorial was beneficial to the community and to children, the advertorial did not fairly represent “in a manner that is clearly understandable to children” that the advertisement was a commercial communication.

‘Strongest results from an advertisement yet’

Meanwhile MLA said its award-winning “Make Lamb Not Walls” has not only attracted advertising industry kudos, but has also produced some of the strongest results the organisation has ever seen from an advertisement.

The ad became Australia’s No.1 trending YouTube video, viewed over 10,000,000 times, with a staggering 1421 media outlets talking about the campaign, as part of its PR outreach.