The outgoing and the incoming presidents of the Australian Cattle Veterinarians Association: Dr Alan Guilfoyle from the Clermont Vet Clinic in Central Queensland and Dr Ian Bradshaw from Cattle Veterinary Services at Busselton, WA.

Scratch the surface of the major issues dominating the Australian cattle industry today – biosecurity, animal welfare, antimicrobial stewardship, and market access – and it is clear all rely heavily on the knowledge and expertise of the veterinary profession.

Incoming president of the Australian Cattle Veterinarians, Ian Bradshaw, told Beef Central at the association’s annual conference at the Gold Coast on Friday that there were probably “a million reasons” why a sustainable veterinary profession is important to a thriving and successful cattle industry in Australia.

Gympie. Qld, based cattle vet Justin Schooth wraps up the case of the negative team, which included Helen McGregor (left) and Enoch Bergman (second from left), in the ACV conference debate ‘that Ag Science has more to offer the pastoral (food production) industry than Vet Science’.

The importance of the services provided by private vets across rural and regional Australia is a particularly topical issue in Queensland at the moment, where the State agriculture minister is considering a push by producer group AgForce to “deregulate” cattle pregnancy testing in the large cattle State.

AgForce is lobbying for the Queensland minister to allow pregnancy testing of cattle in Queensland by trained lay pregnancy testers in addition to veterinarians, as is permitted in the Northern Territory and Western Australia. 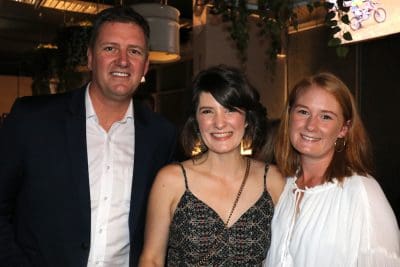 The change of regulation can be made at the Minister’s discretion and, after a recent consultation process with industry, the industry is now waiting to see what the Minister decides.

AgForce says many Queensland cattle producers are forced to rely on a limited number of remotely-based veterinarians for pregnancy testing services. It says this is impractical and expensive, and places Qld producers at a competitive disadvantage to their counterparts in the NT and WA who have access to fee-for-service pregnancy testers in addition to vets.

However, the Australian Cattle Veterinarians Association has argued that removing a key component of the work that underpins the viability of rural Queensland veterinary practices would lead to fewer private vets servicing the area.

The ACV argues the impact of deregulation would threaten other key value-added services provided by vets to the industry, often not charged for, which play an important role in underpinning biosecurity, market access, animal welfare, anti-microbial stewardship and herd productivity. 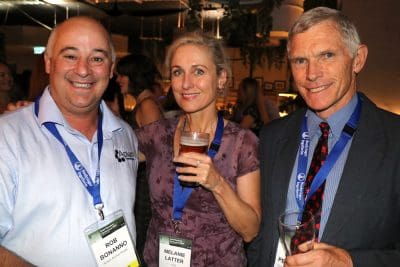 Dr Bradshaw, who owns the Cattle Veterinary Services practice at Busselton in Western Australia, said maintaining high pregnancy testing standards was integral to the sustainability and reputation of Australia’s livestock export industry and its ability to maintain market access.

Dr Bradshaw was formally inducted as the ACV’s new national president at the association’s three-day conference at the Gold Coast last week, taking over from Central Queensland cattle vet Dr Alan Guilfoyle who retired from the position after serving as national president for the past two years.

Dr Bradshaw said a common theme from talking to many of the more than 200 cattle vets who attended the conference from all over Australia was the concern that currently exists about the pressure both vets and their clients are under facing across Australia.

“A lot of people in the room you chat to, right across most of Australia, there’s a real concern there about the number of vets and the clients that they service that are under significant duress for a number of reasons, like drought, flood, continuing anxiety in the live export industry, anxiety about milk pricing and the sustainability of dairies, and concern about animals welfare and the rise in activism lately.” 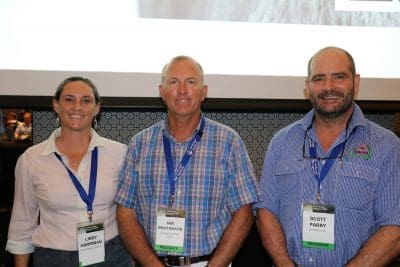 Libby Harriman, Ian Braithwaite and Scott Parry were the affirmative team in the debate ‘that Ag Science has more to offer the pastoral (food production) industry than Vet Science’.

He said agricultural businesses had the right to conduct their farming activities without people trespassing, illegally interfering with businesses and compromising privacy rights.

Animal activists had a right to protest and engage in public dialogue, but must be held accountable for illegal activities that impact privacy rights, interfere with people going about their business, or just doing their job, and importantly, our biosecurity laws.

“Our message is that industry needs to be transparent about its animal welfare record, and what it is doing to make improvements in animal welfare,” Dr Bradshaw said.

“Having a negative attitude towards animal activism is not really going to benefit us in the long term, we have to embrace discussion and dialogue with the community about animal welfare.”

Another issue that would continue to emerge in importance for the livestock sector was the rising awareness around the need for responsible anti-microbial stewardship.

“Don’t underestimate the impact antimicrobial resistance is going to have on the way we operate businesses, especially more intensive businesses,” he said.

“Our level of antimicrobial use in Australia is substantially lower than the US for example and most of the developing countries with large livestock populations.

“But the reality is that animal health and disease and welfare, as farm sizes increases and businesses increase in intensity and try to capture economies of scale, the need for veterinary input around appropriate use of antimicrobials is only going to increase.”

Dr Bradshaw said there are more than 1100 accredited cattle veterinarians working in the Australian beef and dairy industries, and last week’s well-attended conference highlighted the number of young, capable veterinarians coming through.

“There are fantastic opportunities out there for good cattle veterinarians and also many global opportunities for vets and the cattle industry to improve productivity and health and welfare of animals.

“I have spent a lot of time in overseas markets and I can say I think the cattle industry is very well served here, the quality of service provision by Australian cattle veterinarians is very high.”