At the project’s core is a series of recent mixed farming property acquisitions totalling about 7000ha (17,000ac) at Koojan, near Moora in the central midlands wheatbelt district, 170km north of Perth. 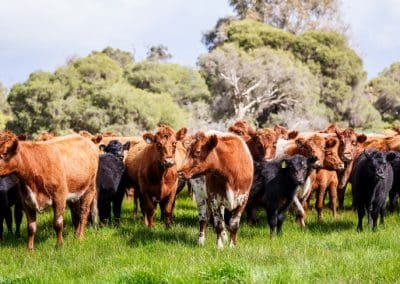 The first development phase would accommodate 40,000 cattle at a time, with a view to supplying about 60,000 100-day grain-finished cattle each year to the Harvey processing facility. A proposed second phase would double that capacity, the company said.

Harvest Road is part of Twiggy Forrest’s Minderoo Group, one of Australia’s largest private investment vehicles. Its portfolio of agricultural investments covers 1.3 million hectares of pastoral land on five properties in the state’s north, the Harvey Beef processing business and a portfolio of fine food brands targeting domestic and international markets, with exports to more than 30 countries.

Harvest Road Group chief executive Greg Harvey said the new project would involve both cattle backgrounding and an ‘intensive feeding’ system, which would include some features significantly different in stock-density and design from conventional feedlots.

The company has deliberately chosen to avoid using the word ‘feedlot’ to describe the project, instead using terms like ‘free range, intensive feeding’. It said the new model would provide cattle with significantly more ‘freedom to move’ than the current grainfed industry standard, and more focus on animal welfare.

The project will include the construction of a large-scale feedmill to process locally-sourced feedgrain, and a renewable energy project to service energy needs.

Asked whether the project would resemble the Ceres Agriculture model in northern NSW, using grain-based ration fed from self-feeders in grazing paddocks, Mr Harvey said he was familiar with the Ceres program, but said the Koojan project would be ‘different, and unique.’ He chose not to disclose the full details behind the project at this stage, for proprietary reasons.

The new Koojan property aggregation put together for the project will not be used for grain production, but will be used solely as backgrounding and grower paddocks for cattle. The surrounding Moora region is considered a solid and safe grain growing region in WA’s grain belt, regarded as some of the most efficient grain production country in the world. The project site is also well located for north-to-south cattle flow between Minderoo’s own northern breeding properties, external feeder cattle supply from other cattle producers, and the Harvey abattoir.

Once regulatory approvals are finalised, Harvest intends to have the first 100-day grainfed cattle exiting the new facility towards the end of 2020, two years from now. In the meantime, the backgrounding component of the project will be activated next year.

“What is missing in the whole WA beef supply chain is a facility like this that gives us the ability to take out the summer/winter seasonal variation that exists in WA slaughter cattle supply,” Mr Harvey said.

While the Harvey Beef processing business already handles some 100-day grainfed product supplied through third-party WA feedlot operators, consistency throughout the year was a challenge, and the new project would serve to fill that gap.

He said the new facility at Koojan would be complementary to Harvey’s existing grainfed beef supply, and would not simply replace it. Some of the technology Harvest Beef plans to introduce could also be picked up and used by other feedlot operators.

The new project will also have a significant impact on Harvey’s product mix, with a much larger portion of annual production now oriented towards grainfed, rather than grassfed.

“Western Australia by rights should be producing the highest quality beef in the Asia Pacific,” Mr Harvey said in a statement issued today.

“We have a unique provenance as one of the most isolated and pristine agricultural regions in the world, and WA needs to capitalise on that.”

“Today’s food consumers are food citizens. They express their right to have ethically-produced foods that are clean and traceable. This project will build an international reputation for WA beef that delivers a high-quality product to consumers with confidence.”

“For years now, Western Australia has missed many opportunities in the top end of the beef market, by failing to develop and consistently supply premium products that add value to our local cattle trade,” Harvest Road’s general manager for Livestock, Kim McDougall said.

“Now, the world can taste the true quality of our locally produced beef, and we can keep the processing stage on-shore to create jobs, ensure the ethical treatment of our animals and give producers a real alternative when they come to sell their cattle,” he said.